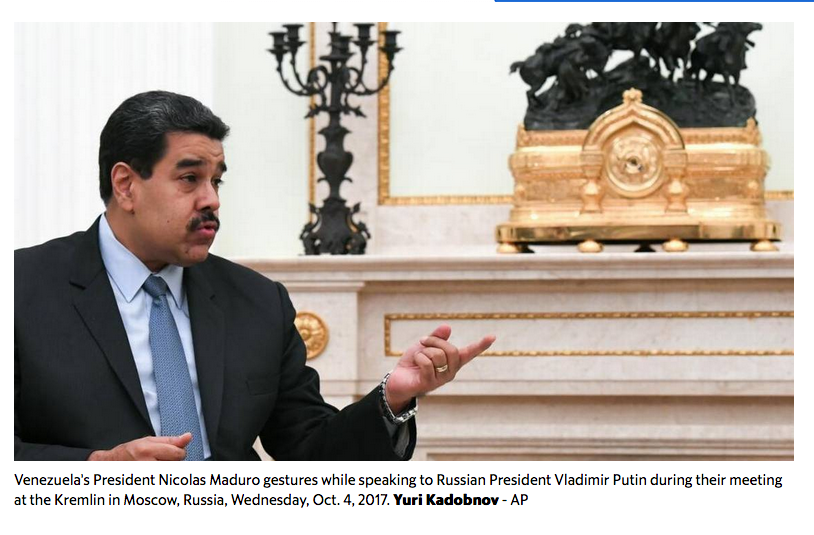 With its coffers empty and its financial moves restricted by U.S. sanctions, Venezuelan President Nicolás Maduro’s government is facing a nightmarish scenario with the approach of Halloween, when a series of debt payments totaling more than $3.5 billion are due.

Analysts said the government will do everything possible to make the payments, even if it means further cuts in already reduced food imports, which would deepen shortages in a country where a majority of people cannot get three meals a day.

But a default cannot be ruled out because of the precarious state of the country’s finances, the low level of reserves and the reluctance of strategic allies like Russia and China to continue lending money to Venezuela.

The Venezuelan government faces a string of small payments due this month, such as the $28 million owned by the state-owned Caracas electricity company.
“The truly hellish week will come around Halloween, the 27th, when they basically have to pay $1 billion and then Nov. 2, when they will have to pay another $1.2 billion,” said Russ Dallen, managing partner at Caracas Capital.

Holders of Venezuelan bonds already face an “existential crisis” because of doubts about the government’s ability to pay the $3.526 billion required over the next six weeks, added Antonio De La Cruz, executive director of the Inter American Trends consultancy.

Standard & Poor and Fitch already rank Venezuela as a country “with a high probability of default” in the next six months, because it lost most of its access to international credits as a result of sanctions imposed by the Trump administration that ban the sale of Venezuelan bonds in the United States.

De La Cruz predicted the government will do everything possible to avoid a default this year because Maduro and his aides are convinced that they will not be able to remain in power if they default.

Those two factors could generate an additional $11 billion cushion for the government and give it much more room for maneuvering.

De La Cruz said he would not be surprised to see Maduro make further cuts in imports, currently already at just over 20 percent of the $60 billion mark in 2012.

The cuts have already pushed millions of Venezuelans to the edge of famine, in a country where domestic production collapsed under the weight of a government long hostile to the private sector.

But the government could also decide to suspend all imports of food and medicine, De La Cruz added.

“They have demonstrated that they do not care about the well being of the people if it risks their hold on power,” he said.

The government has averted default in recent months because of timely loans from the Russian government, which so far has always seemed ready to provide the millions of dollars needed by its foundering Latin American ally.

But Dallen said he was not sure whether the Russians would be willing to come to the rescue again.

“The Russians are not very happy,” Dallen said, noting a report in June that Venezuela had failed to make a $1 billion payment due to Moscow.

One billion dollars may not look like much in the United States, but it’s a lot for Russia, said Dallen, who often consults with Washington officials on Venezuelan affairs.

The Russians may well be approaching the point of concluding that continuing to invest in Venezuela is too risky, he added.