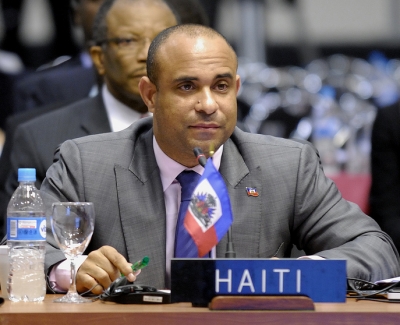 Only yesterday there was doubt as to whether or not ex-Prime Minister Laurent Lamothe would  file  documentation for his  Presidential run.

During the final days – moments – minutes – seconds –  EVEN NOW – President Martelly, his wife Sophia and their criminal cabal do their best  to deny Laurent Lamothe the documentation to support his candidacy.

Games are played with Lamothe’s legitimate discharge, while Martelly is feeding candidates, into the mill, so that he can reject them later as back-up for his blocking of Lamothe.

Thierry Mayard-Paul and the little grey mouse, ex-Prime Minister Duly Brutus will be rejected as part of the game

Martelly, and his team, live in fear of Lamothe’s desire to bring law-and-order, criminal justice, education, and a higher standard-of-living to Haiti’s 10,000,000 desperate people.

Martelly promised all of these, during his campaign and, with Lamothe as Prime Minister, did much to make PWOMIS SE DET a reality. With Martelly’s unfortunate, and foolish removal of Lamothe, everything started to deteriorate before the  world’s eyes.

Martelly made his Pwomis a lie as all of Lamothe’s projects were cancelled.

However, May 20th was Laurent Lamothe’s day, a day in which the population could voice their ongoing support for his efforts to help the Haitian people, not a small, select few from the Palace.  There was doubt.

At noon there was doubt.

Then the Word spread and people started to congregate in front of the Lamothe offices in a spontaneous manifestation of pent-up support.   A mass of people, from many districts, walked to Lamothe’s location, blocking streets for blocks around the site.

When it started to rain, some suggested Lamothe travel by car. He refused this solution saying, “They have come to support me. I will march with them”, and he did.

It was a Presidential Procession!

At some point, the government will have to deal with AP’s biased reporting, or have it registered as a publisher of fiction. The problem extends back to the Aristide period in which AP’s Michael Norton received a monthly payment from Aristide. Norton was married to a well-known Lavalas personality – Toto Bissainthe, and he followed the Lavalas doctrine, ignoring the truth.

We would hope that President Michel Martelly will now be man enough to stand aside, and insist that his wife Sophia, Kiko and the rest of his inner circle, stand aside and cease their blocking of the Democratic Electoral Process.

Let the game begin – open to all – and let the Best Man Win.

We are betting on Laurent Lamothe!

The International Community is betting on Lamothe.

Without a truly free-and-fair election Haiti is doomed to become the Pariah of the Caribbean.

We would then be vulnerable to a Noriega Situation in which our Nation suffers another “invasion” as the International Community swoops in to restore stability, and arrest a few dozen targets.

Martelly and Sophia could be included in this cleansing operation.

2 thoughts on “LAURENT LAMOTHE MAKES SPONTANEOUS – TRIUMPHAL MARCH FROM HIS OFFICE TO THE CEP – ACCOMPANIED BY SEVERAL THOUSAND PEOPLE – AND RARA BANDS – TO FILE PAPERS FOR HIS RUN TO THE PRESIDENCY. MARTELLY STILL WORKS TO HAVE CEP BLOCK CANDIDACY OF HIS FRIEND WHO FINANCED MARTELLY’S PERSONAL VICTORY CAMPAIGN”