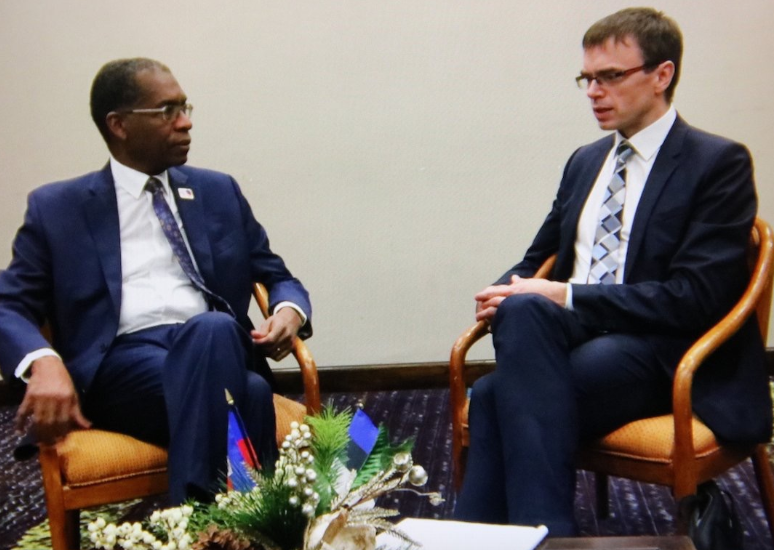 The Haiti-based EU diplomat and estophile, Karel Lizerot, dedicates a poetical political reflection about the role of Estonia out in the wide world.

Kuursaal, the resort hall in Haapsalu, Estonia, and hotel Oloffson in Port-au-Prince, Haiti, were built nearly in the same year, in the late 19th century. The delicate wooden lace patterns that can face Nordic frosts and the Caribbean wooden gingerbread motifs that resist to tropical storms are actually quite similar. Timber homes are increasingly popular in Estonia with approximately 50% of the country’s territory covered by forests. Wooden houses are in decay in Haiti with deforestation amounting to 98%.

Estonia and Haiti. A very improbable combination. And yet, Sven Mikser, the Estonian minister of foreign affairs, will visit Haiti in December 2017. Will he bring a piece of the Haapsalu wooden lace to attach it to a gingerbread style house here and to observe what the effect will be? Will he create a new ornament?

Estonia´s contribution to development cooperation deserves to get clearer contours. A modern, admittedly Nordic nation is based on high economic liberalism, unlike its Northern neighbours. Estonians have worked very hard and efficient to transform a forgotten poor Soviet-occupied province into a high-tech, state-of-the-art country. They do not buy in some concepts of the European development policy, injecting budget support to lamed systems and giving donations from European tax payers to trapdoors. Nevertheless, would Estonians like to export their values?

Estonians could help Haitians to redefine themselves

The Estonian national flower is cornflower, prized for its blue pigment. Estonian blue for which generations of occupied Estonians had to fight in the 20th century, is also used as an edible flower for culinary decoration or as an ingredient in tea blends. Estonian modesty and diligence with a pinch of salt.

The Haitian national flower is hibiscus, used in their national tourism slogan: Experience it! Whoever offers a hibiscus recognises the delicate beauty of the person who receives it. What can Haiti offer to Estonia? Both cornflower and hibiscus have beautiful petals that surround their reproductive parts. They do not attract the same pollinators, but they share more than we think. Were we to overlap them, what pattern would emerge?

A food-insecure illiterate fisherman who does not know how to swim and has to painfully learn how to exploit the salt marsh to survive and a business director of an IT start-up that operates from his modern log house next to a bog and has to go to Finland to attend a conference; we may wonder about their level of consciousness, perception and awareness. What is their mutual interest?

An apparently impossible approximation. But that is what the modern world is about. The line between wrong and right is the width of a thread from a spider’s web. And it is precisely for this reason that we must defend the truth that forms our values. Estonians know something about it. They could help Haitians to redefine themselves, to find their place on Earth. The Western part of the Hispaniola island must become a merciful location. Through introspection, inner hard work and humility. That keeps a miserable away from the abyss. And only then, development can come.

A tiny country influencing the big ones

In December 2017, some Haitians may learn about the existence of Estonia, twice as big as Haiti and ten times less populated that has governed the European Union for the second half of this year. They may learn what it means to belong to a community of nations you want to belong to, despite their current confusion. They may learn what it means for a tiny country to influence the big ones by ingeniousity and inventivity.

I do not know what impressions Sven Mikser will bring home to Tallinn. Will it be a fine set of loaded thunderstorms from a tropical depression and sunken sky pouring down on him or will it be the illumination of the lower atmosphere, sweet light and blue hour? What will the Estonian ministry for foreign affairs learn from this visit? I wish I could soon share with my dear people in Pärnu or Tartu what Jacmel or Jérémie are about.

My consolation is that as an EU diplomat, I also work for Estonia here. Tell me, Eesti, how do you want things to be done? I am responsible for some EU development programmes in Haiti. I hope I could sometimes lay cornflower blossoms on the results of my work.