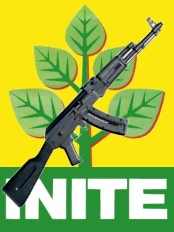 A meeting of Preval’s INITE party was held at Justice Minister Paul Denis house, in preparation for another gathering tomorrow morning at 9:30 at INITE headquarters.

During a verbal altercation the violence escalated to a point where Senator Joseph Lambert and Yvon Jerome pistol-whipped Gary Joseph, badly injuring him. He was taken to the hospital and will prefer charges against his assailants in the Parquet tomorrow morning, if his conditions allow it.

The tone of the meeting reflected the high principles of the INITE group as one member accused another of being a killer…”God knows how many people you have killed. We will be rid of you after the March 20 elections…!!!”

And Senator Anacasis promising bloodshed if the elections are held on March 20….promising violence on the 23rd March.

Just a bunch of democratic and enthusiastic cocaine traffickers, murderers and thieves moving to steal the government.