Six months ago a political struggle began between those who want change and modernization in Haiti and those that want to maintain the corrupt, poverty stricken status quo. The battle over the ratification of Daniel Rouzier is a key component of that battle.
The fight for modernization in order to win the future started last November.  Preval and his INITE coalition did not deliver to the Haitian people over the 10 years they were in power. Their management of the country during their term was marked by corruption, incompetence and theft at all levels of government.  Along with their corrupt associates in the corrupt Groupe de Bourdon business cartel, they looted everything they could from the state coffers and monopolized all state resources – enriching themselves and keeping Haiti mired in crushing poverty. Facing elections last November they carefully planned an electoral coup to take over two-thirds of both chambers in parliament and the Presidency. Preval and INITE operatives wanted kill change at the polls. In preparation for the electoral coup, they put in place a partisan Provisional Electoral Council (CEP) that was in charge of manipulating the results on the frontlines. During both the November 28, 2010 and March 2011 runoff elections, they modified the tally sheets and the results attempting to steal the elections (see: http://solutionshaiti.blogspot.com/2011/05/haiti-inite-tries-to-steal-parliament.html ).
But Haitian voters were fed up after the incredibly slow and weak response to the devastating January 12, 2010 earthquake. They reacted quickly and took the streets to protest the results and call for Preval’s resignation. Facing a potential overthrow, Preval called on his allies at the OAS to fix their botched efforts to manipulate the results. Unfortunately, the OAS focused only on the first round of the elections and only on the Presidential Elections. Because no one was focused on the legislative elections, by the end of the runoff, Preval and INITE has managed to steal 37 seats in the House of Deputies and six Senate seats.  Haitian voters won a partial victory in their fight against Preval that rigged at least four elections in 10 years (April 6, 1997, May 21 and November 26, 2000 and April 19 and June 2009.), and broke the continuity of corruption that Preval and his allies so desperately fought to maintain.
On May 13, 2011 Preval made a second attempt to shift power from the Presidency that he has loss.  The General Assembly of the Haitian parliament voted for a number of constitutional amendments on May 9, 2011, which were sent to the President in order to be published in Haiti’s Official Register, Le Moniteur. The analysis of the amendments in Le Moniteur on May 13 revealed that between 13 to 44 articles of the amendments has been changed from the May 9 version that was voted on. Questioning of the President of the Haitian Senate, Rodolphe Joazile, and statements by Senator Steven Benoit confirmed that the amendments had been modified and the original version that was voted upon had disappeared. Senators Jocelerme Privert and Rodolphe Joazile of Preval’s INITE have been identified as responsible for illegally modifying the amendments. Many analysts believed this was done under the direction of Preval. A Senate Commission has been tasked with investigating the matter. Since the country’s consensus is that the amendments were falsified, President Martelly issued a decree on June 3, to nullify them and reinstate the 1987 constitution that governed the country for the past 25 years. It has been wrongly reported by the Washington Post and other news outlets that Martelly blocked a “new law” that would bring greater access for the Haitian Diaspora because he contended the law was modified.  It was not a law, but the amendments that made sweeping changes to many sections of the constitution, and there is ample and irrefutable proof that they were modified.
On May 14, 2011, in a pathetic attempt to forestall Martelly’s change agenda, INITE cut off electricity to the parliament buildings during Martelly’s swearing in ceremony as the 56th President of Haiti.
Right after taking office Martelly named Haitian business leader, Daniel Rouzier, as Haiti’s Prime Minister.  Rouzier is known as a moderate individual full of integrity and successful business leader. Haitian reformers welcomed the nomination that was considered as a threat for those involved in corruption for the past 25 years in both private and public sector. The forces opposed to change launched a nasty campaign to undermine Rouzier’s ratification in parliament. It was rumored that he did not pay is taxes; that he had U.S. citizenship; that he was serving the interests of Jamaica; and that his light skin color was a throwback that would revive the politics of color of the 40’s and 60’s. It was nasty. Using the resources of the government that they still control, Preval’s cabinet, with Prime Minister Bellerive and all the ministers still in office, mustered a full fledge propaganda campaign to stop Rouzier.
On June 17, the commission in charge of analyzing Rouzier’s documents concluded that he paid his taxes and that his documents met the constitutional requirements to become the next Prime Minister of the country. As an aside, the constitution requires the Deputies to disclose their financial statements over the past five years, and they have failed to do that to date. 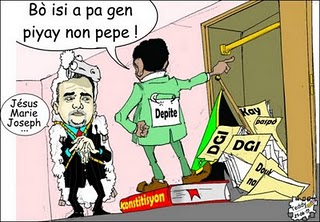 On January 20, INITE deputies prevented 20 deputies from other parties to validate their powers despite the fact they had the official decree that recognizes their election victory.  On June 21, 42 INITE deputies voted against Daniel Rouzier while 19 from other parties voted for him and three abstained. This was a serious blow to President Martelly’s change agenda. INITE has stated that they want positions in the cabinet in order to ratify a Prime Minister and the next government. The Haitian constitution provides for party who has an absolute majority in parliament to form the government, but there is no majority party in Haitian parliament so their demands are unfounded.
President Martelly’s Chief of Staff Me. Thierry Mayard Paul stated that the Executive Branch has its responsibility and the Legislative Branch’s role is to legislate and control and supervise the government. There will be no negotiations. For the past 10 years INITE with Preval had divided the ministries like pieces of pie and enjoyed the resources of the public sector. State resources in both the Legislative and Executive branches have allowed INITE leaders to become personally rich while the country was starving. They were involved in many financial scandals, most notoriously stealing $463 million of Petrocaribe funds, and stealing workers social security funds at ONA. Among the Haitian people there is high resentment and aggression toward INITE and Preval. INITE’s approval in parliament among the people is merely 3%. INITE and Preval’s fight is to prevent any audit and investigation within the ministries uncovering all the corruption of the past years. 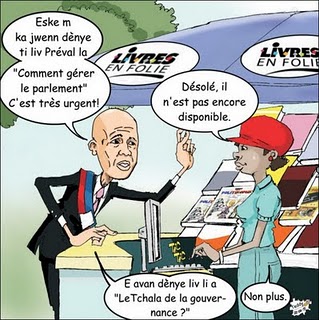 INITE strategy seems to stop Martelly’s efforts to modernize and his change agenda on a multiple fronts. Essentially, they are miring him in the system which could eventually swallow him and subvert any attempts at change. Without a government the President’s activities are very limited. Meanwhile INITE is trying to get Prime Minister Jean Max Bellerive and the other Ministers that are managing current activities back in the front seat, which disgusts the Haitian people that claimed they do not want any “Bouillon rechauffe” which literally means they do not want these “leftovers” associated with corruption and mismanagement of the country.  While doing so they are also using the resources of the government to target and undermine every single initiative of the President. They attacked his education initiative, which focused on ensuring that the 650,000 kids who did not go to school last year because their families could not afford it, could do so this year. All of his efforts are under attack, including attempts to prepare the country and institutions for the hurricane season, when 17 hurricanes are scheduled; his efforts to stop and address the cholera epidemic; and his efforts to jump start the economy. Martelly is being attacked from within because the INITE political appointees are still in place in the civil service.
What’s Next?
Martelly has three options:
First, he could democratically confront INITE in parliament the same way that Democratic and Republican Presidents engage the Congress in the US to move their agenda. In that context Martelly can go to the people to mobilize them and ask them to call and pressure the deputies while renominating Rouzier. Martelly is very popular right now and the wind is with him among the people while INITE is very unpopular (again, they have a 3% approval rating).
Second, he could nominate a new Prime Minister. The INITE deputies will almost certainly block him or her. They stated that they would not ratify Rouzier, who futfilled the Article 157 conditions of the constitution to become Prime Minister, unless Martelly gave them 8 of the 17 ministries. Without that INITE claimed none of Martelly’s Prime Minister candidates will make it. So by nominating someone new, Martelly would be forcing them to go on record that they will approve no one.
Third, he could allow INITE to swallow him by meeting their demands for the ministries in order to get his Prime Minister through. This is the most risky path. The Haitian people who voted for him, voted for change. Any perception that Martelly is endorsing a strategy to cohabitate with a coalition that stole part of parliament and continued to drive Haiti off the cliff will cost him a lot.
Meanwhile the situation is dire in Haiti. The country is threatened by 17 hurricanes, while 1.1 million people are still living in the street 19 months after the earthquake. The cholera epidemic brought to the country by the UN Nepalese soldiers is spreading again because of the rainy season. Without a government to deal with this situation, 800,000 Haitians could be contaminated by November. International aid is continuing to be poorly managed and all the country’s problems are being put on hold until the political standoff is resolved.  Knowing the dynamism of Haitian politics, this standoff is not sustainable for either side. The Haitian people’s patience has run out and they will not tolerate inertia.