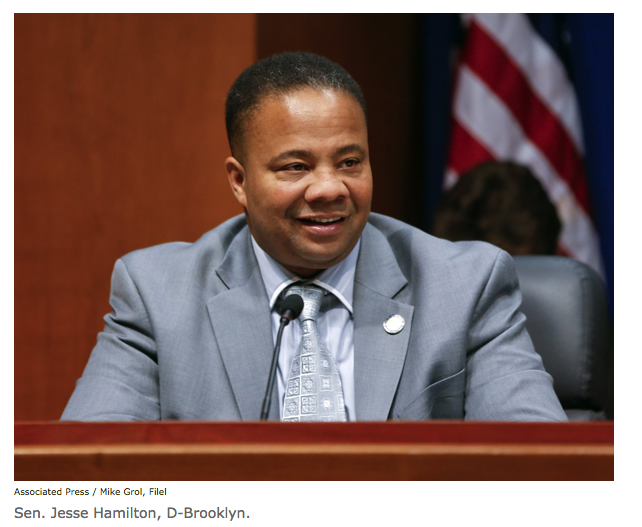 “I stand in resolute opposition to the Trump administra­tion’s disgraceful decision to target yet another vulnerable population for inhumane mistreatment by withdrawing Temporary Protected Status from 59,000 Haitians,” said Hamilton, who represents the 20th Senatorial District in Central Brooklyn. “Haiti is still rebuilding in the wake of natural disasters that have killed hundreds of thousands and displaced more than 1.5 million people in recent years. In our country, that would be something akin to 45 million Americans displaced.

“Haiti is particularly vulnerable because the World Bank identified it as the poorest nation in the Western Hemisphere, with a 2016 GDP [gross domestic product] per capita of US$739 compared to the United States’ US$57,466,” he added. “Granting temporary protected status to 59,000 Haitians is incredibly important to them and their US-born, US-citizen children but also important to the capacity of Haiti itself to continue rebuilding.

“The Trump administra­tion’s decision to withdraw this status fails to recognize the situation on the ground in Haiti, wrenches families, and stunts Haiti’s ability to rebuild with help sent from TPS recipients, Hamilton continued. “This unjust policy disregards our humanitarian obligations, perversely, at a time when the spirit of generosity and compassion should be especially fresh in our minds.”

Hamilton said his office will continue to be a “Sanctuary Senate office, connecting immigrants to resources like free legal representa­tion.”

“I will stand with colleagues, advocates, and New Yorkers of good conscience across our state,” he said. “We will not permit Trump to trample the rights of our friends and neighbors.”

Last week, Black Democratic congressional leaders in the US joined Caribbean legislators in expressing outrage over the Trump administra­tion’s decision.

US Department of Homeland Security (DHS) Acting Secretary Elaine Duke said on Monday that she made the decision to terminate the TPS designation for Haitians, with a delayed effective date of 18 months, “to allow for an orderly transition before the designation terminates on July 22, 2019.”

But on Tuesday, US Congresswoman Yvette D. Clarke, the daughter of Jamaican immigrants and chair of the Congressional Black Caucus (CBC) Immigration Working Group, Congressman John Conyers of Michigan, House Judiciary Committee Ranking Member, and Congressman Cedric Richmond of Louisiana, CBC chairman, said, in a joint statement, that they were outraged by the decision that now forces the Haitian immigrants to return home.

They noted that the massive earthquake in the French-speaking Caribbean country killed more than 300,000 people in 2010, disrupted the function of civil society, displaced families from their homes, closed schools and social service agencies, created instability in the government and undermined the economy.

The Black congressional leaders said these conditions were exacerbated by the cholera epidemic, subsequent hurricanes and food insecurity crisis, “which continues to this day.”

“By ending Temporary Protected Status for Haitians, the Trump Administration has put the lives of more than 50,000 people at risk,” Clarke, Conyers and Richmond continued, stating that the decision is a “low point for this administra­tion” and “will leave an indelible mark further tarnishing his [Trump’s] legacy.”

New York State Assembly Member Rodneyse Bichotte, the daughter of Haitian immigrants, who represents the predominantly Caribbean 42nd Assembly District in Brooklyn, New York told Caribbean Life on Tuesday that she was “equally saddened and angered” by the decision.

“For anyone who has been to Haiti in recent months, it is clear that the administra­tion’s decision does not coincide with the dangerous reality on the ground,” said Bichotte, the first Haitian American from New York City to be elected to New York State Assembly. “The return of tens of thousands of people is only going to make conditions worse.”

New York City Councilman Jumaane Williams, the son of Grenadian immigrants, who represents the 45thCouncil District in Brooklyn, said he was “appalled to hear the administra­tion’s decision, but I was not shocked.

“This kind of callous, deliberate disregard for the well-being of hard-working immigrants, this disdain for our fellow human beings, is what we’ve come to expect from Donald Trump,” he told Caribbean Life. “Trump’s own State Department has a travel advisory in place, which cites the dangers of travel to Haiti for Americans. Yet, he has no problem forcing Haitians, who came here in the wake of a devastating earthquake and outbreak of disease, to return to a country once again crippled by a natural disaster, Hurricane Matthew.” ‘

But Eugene, who represents the 40th Council District in Brooklyn, also said the 18 months gave advocates more time to organize, perhaps for a more permanent status.

“If they are still here, we are going to continue to fight,” he said.

According to the New York Immigration Coalition, about 5,200 Haitians with TPS live in New York City and about 59,000 in the United States since the massive earthquake.

For some Haitians who had entered the country illegally or overstayed visas, TPS allowed them an opportunity to live and work openly, the Times said.