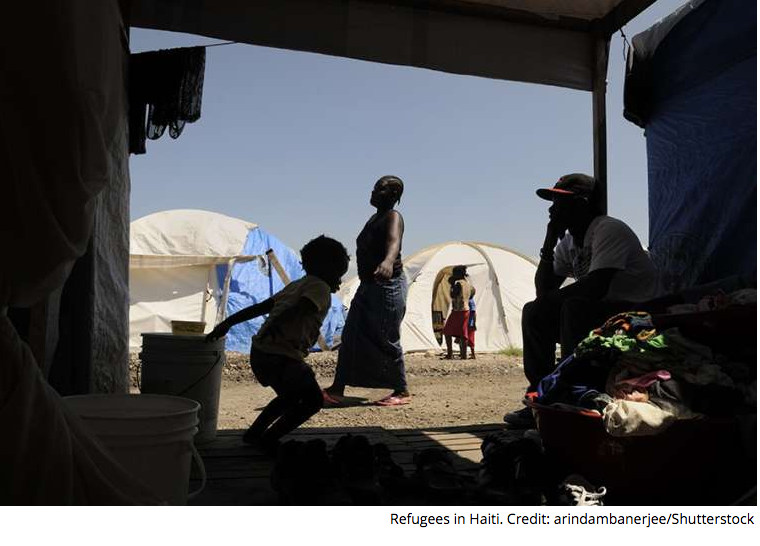 Miami, Fla., Jan 30, 2018 / 12:00 pm (CNA/EWTN News).- The future of tens of thousands of Haitian migrants is unclear, after the Trump administration decided not to extend legal protections for them.

While the National Association for the Advancement of Colored People has filed a legal challenge to the decision, alleging it was racially motivated, Archbishop Thomas G. Wenski of Miami has said that Congress must act—and people should be conscious of Haitians’ experience of racial discrimination in the U.S.

“The lawsuit might ‘buy time’ for the affected Haitians; but, more critical is a legislative fix,” the archbishop told CNA. Haitians with temporary protected status are in a “holding pattern,” like being in “limbo.”

“They cannot adjust status to permanent residency, they cannot travel home. So, a permanent legislative solution is where we should put our energies,” he added.

There are at least 46,000 Haitians in the U.S. currently qualified for the TPS program, since a massive 2010 earthquake in Haiti killed 200,000 people and left one million homeless. Hurricane Matthew’s landfall in Haiti caused tremendous damage in October 2016, with the Category 4 storm putting more than 1.4 million people in need of emergency aid.

TPS status allows people who are unable to return safely to their home countries because of armed conflict, other violence, natural disasters, or other extraordinary conditions to remain in the United States while the situation in their home country resolves. It protects them from deportation and grants them permission to work.

Many Haitians in the U.S. send money back to Haiti to support their relatives.

The Trump administration decided not to renew their protected status in November 2017. Their status is set to end July 22, 2019.

The NAACP Legal Defense and Educational Fund on Jan. 24 filed suit charging the decision showed “an intent to discriminate on the basis of race and/or ethnicity” and departed from other statutory requirements.

Asked how to avoid apparent or real discrimination in public policy, Archbishop Wenski replied: “Well, insensitive or inflammatory language does not help.”

“The last 20 years have been difficult in Haiti – both politically and economically, yet both Bush and Obama routinely rejected requests for TPS alleging that to do so would result in more out migration from Haiti,” Archbishop Wenski said.

“Obama only relented in 2010 when the devastation of the earthquake basically shamed the Obama administration into granting TPS.  So, TPS might have gone away even with a different administration, but rhetoric and inflammatory language of some in the administration suggest an animus against people of color,” the archbishop said.

The NAACP lawsuit cited reported comments from President Donald Trump and other actions of the administration, National Public Radio reports. It was filed in the U.S. District Court for the District of Maryland on behalf of the NAACP’s Haitian members protected under the program. It aims to secure a court injunction against the decision.

The lawsuit charged that President Trump has “racialized goals concerning immigration.” It cited the president’s private comments reported in the Dec. 23 New York Times in which he allegedly suggested that 15,000 Haitians who came to the U.S. in 2017 “all have AIDS.” At a Jan. 11 meeting regarding DACA, he reportedly asked why the U.S. needs “more Haitians” and immigrants from African countries he described allegedly using a vulgar term of disparagement.

At the time, the remarks drew rebuke from the U.S. bishops’ conference.

The president denied making the remarks in a Jan. 12 tweet, saying “Never said anything derogatory about Haitians other than Haiti is, obviously, a very poor and troubled country. Never said ‘take them out’,” he said, contending that Democrats had made up the claims. “I have a wonderful relationship with Haitians,” he said.

Department of Homeland Security leaders like Acting Secretary Elaine Duke and Secretary Kirstjen Nielsen  “took irrational and discriminatory government action, denying Haitian immigrants their right to due process and equal protection under the Fifth Amendment,” the lawsuit charged. It also cited a top U.S. Citizenship and Immigration Services official’s request on data for crimes committed by Haitians in the protected status program.

Archbishop Wenski, who is fluent in Haitian Creole, said that it is “impossible to discount” the racial factor in considering Haitians’ experience of discrimination.

“In the 1980s Haitians were arriving in significant numbers on boats from Haiti and Cubans on rafts from Cuba: they were coming from same geographical region to the same geographical place, both Cubans and Haitians were fleeing from political oppression and economic misery (in fact the economies of both countries were basket cases because of each country’s lousy politics – one right wing, the other left wing),” he said.

“But the mostly white Cubans were welcomed as ‘political refugees’ – though no Cuban arriving by raft had to even apply for political asylum; and the Haitians were not welcomed because they were perceived as economic refugees and vast majority of their applications for political asylum were routinely denied.”

The archbishop warned of the danger of racism.

“Racism allows us to ‘depersonalize’ or ‘dehumanize’ a whole class of people and thus offend their human dignity,” he said. “Such reductive thinking leads us to view people perceived as different from us as ‘problems’ and not as persons.  When we see a class of people as problems then we can be tempted to find ‘solutions’ – even ‘final solutions’ as the tragic history of the twentieth century showed us.”

The lawsuit added that Haiti is “ill-prepared” to receive the tens of thousands of Haitians living in the U.S.

An estimated 200,000 Salvadorans had temporary protected status due to major earthquakes in El Salvador in 2001, but their status will expire in September 2019. Another 57,000 Hondurans have protected status; the Department of Homeland Security will decide whether to extend or end this status in May.

Archbishop Wenski suggested Haitians and others with TPS status could be addressed in a reported deal on the treatment of beneficiaries of the Deferred Action for Childhood Arrivals program, which protects U.S. residents brought to the country while they were still minors.