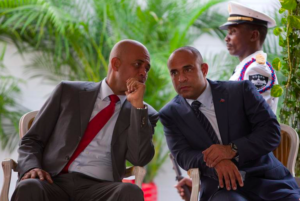 The world watched as Prime Minister Laurent Lamothe won this year’s Leadership Award for Latin Business. For years Haiti has remained an unknown quantity as consecutive governments did nothing to improve the Nation’s position within the world community. All of this has changed with the dynamic thrust of the Martelly/Lamothe team.
In a short time President Michel Martelly and his Prime Minister, Laurent Lamothe have seized each and every opportunity to promote Haiti and bring investors into our economy. They have done more in three short years than all of the governments since 1986 – combined.
The International Community is looking towards a smooth transition from Michel Martelly’s Presidency to that of Laurent Lamothe.