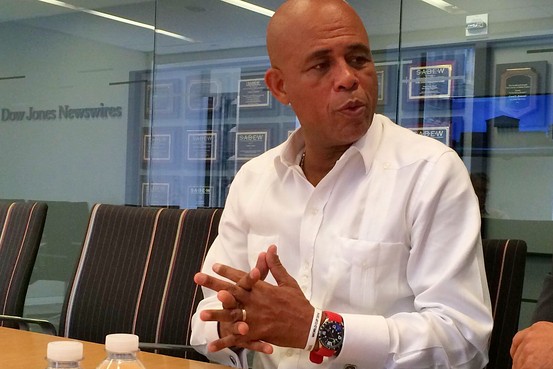 The President of Haiti, Michel Martelly, dropped in to the Wall Street Journal’s New York headquarters a few days ago to talk about his plans for stabilizing and expanding Haiti’s economy. Devastated by an earthquake in 2010 that left more than 100,000 people dead, Haiti has struggled in the ensuing years to attract the attention of the international investing community.

When Mr. Martelly breezed into the Journal’s offices some half an hour later than expected, his casual outfit and cheerful demeanor contrasted starkly with the sharp suits and dour expressions worn by his surprisingly sizeable entourage of henchmen.

His message, however, was as polished and serious as his security crew. After rattling off the usual presidential array of statistics relating to schools and hospitals, human development and security he turned his attention to the gnarly business of, well, business.

Attracting foreign companies to invest in Haiti is one of Mr. Martelly’s key objectives. But he acknowledges that Haiti has a problem. The 2010 earthquake shattered much of the country’s infrastructure, and in its wake Haiti developed an image as a basket case, a country whose only hope lay in attracting charitable aid.

That image, though, is no longer accurate, says Mr. Martelly. In a barely concealed dig at the aid community, he said: “Instead of selling our problems and trying to attract pity or charity, let’s sell what we have that’s great and exploit that, so we can get funds and change Haiti.”

Haiti’s President is not alone in his belief that highlighting the country’s problems is hindering its development. Douglas Clayton, CEO of frontier-market fund manager Leopard Capital, which has invested $5.4 million in a range of projects in Haiti, says: “The NGOs project only Haiti’s flaws, to sustain their fundraising. Actual progress tends to get under-reported.”

And actual progress has been significant. According to the IMF, Haiti’s economy is among the fastest growing in the Caribbean, having expanded by 4.3% in 2013. The country is also growing its foreign direct investment, albeit from a low base. “Foreign investment has gone up. It was $29 million in 2009, now it’s about $220 million,” Martelly notes.

He also counters critics’ assertions that the government is not working quickly enough to rehouse people who have been living in camps since their homes were destroyed by the earthquake. “Before, you couldn’t go around the capital without seeing 10 or 15 camps,” Mr. Martelly says. “Now you have to actively look for them.”

The government’s focus has been on attracting investment to agriculture and tourism, but it has also tried to attract companies to Caracol, a $300 million industrial park on the site of a former fishing village on the north coast. Response has been muted, though, and fewer than 5,000 of the hoped-for 65,000 jobs have so far been created.

Leopard Capital’s Mr. Clayton applauds the government’s efforts to attract investment but cautions that operating in Haiti can be a frustrating experience: “Investors have to navigate lots of obsolete regulations and procedures to invest in Haiti,” he says.

If Mr. Martelly is true to his word, those investors who do brave the tangled web of obsolete regulations will receive a warm welcome.

Write to Dan Keeler at dan.keeler@wsj.com.