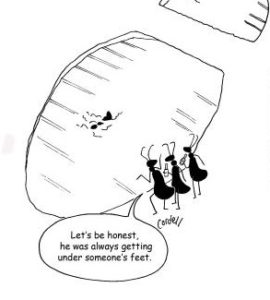 The tropical storm bearing down this week on Haiti threatens to add more layers of misery in a country that has been awash in suffering since the 2010 earthquake. Two-and-a-half years and billions of dollars later, the most basic necessity — safe, permanent shelter — remains out of reach for hundreds of thousands of the displaced.

Government officials and aid groups on Thursday had little to offer the most vulnerable Haitians as time ran out, besides asking people to remain calm as they braced for the storm’s impact. The 390,000 people whose homes are plastic sheets and sticks, or battered tents, or quake-damaged houses long ago condemned as too dangerous to occupy and impossible to repair, could not have been comforted. The slogan “Build back better” — so often repeated as the principle guiding the immense international aid and reconstruction effort — must seem like a cruel joke.

A report by Deborah Sontag in The Times last week exposed the failures of the rebuilding effort, which can be described only as inadequate, inconsistent and, in some cases, inept. More than a million people were made homeless in 2010. Today about a third of them are still living in 575 displaced-persons camps, where the living is miserable: dangerous, dirty, lacking toilets and showers, vulnerable to landslides and flooding. Tens of thousands more were evicted from camps in the last two months and are homeless, though no one knows where they all went. While the quake damaged or destroyed more than 200,000 homes, a mere 15,000 have been repaired, and just 5,700 new, permanent homes have been built.

And the rebuilding has been scattershot, proceeding “unsystematically,” as Ms. Sontag wrote. “Many families with the least resources have been neglected unless they happened to belong to a tent camp, neighborhood or vulnerable population targeted by a particular program.”

Some of the investments seem ill considered, though well intentioned. At least half-a-billion dollars has been sunk into 125,000 “transitional shelters,” lightly built wood-frame structures that were meant to last a few years as a stopgap while permanent homes went up. The new homes haven’t been built, so the stopgaps are still occupied, even as they are being shredded by wind and sun and becoming slums.

The largest transitional shelter encampment, called Corail Cesselesse, is a maze full of people biding their time. That relocation effort, in a barren plain far from Port-au-Prince, didn’t come with jobs, amenities, shops or constructive things to do.

There have, of course, been many accomplishments. Mountains of rubble have been cleared, and various building projects — a South Korean-owned garment factory northeast of Port-au-Prince, a hotel — are moving forward. Haiti had a peaceful government transition, its first ever, and now has a president, prime minister and cabinet in place to get projects approved and started. Surely some blame for delays can be laid to political uncertainty, a cholera epidemic and a continuing shortfall in aid donations for rebuilding and relief.

The United Nations humanitarian agency reported recently that a $231 million program by the United Nations and international donors to meet shelter, sanitation, food and other emergency needs in 2012 had raised $47 million by July 24, so the budget was cut to $128 million. At the end of July, it still needed $81 million to get to the end of the year. While progress has been made, the lack of basic, permanent housing remains the greatest failure in postquake Haiti. Now, as another potential disaster looms, many of the displaced may be victims again.