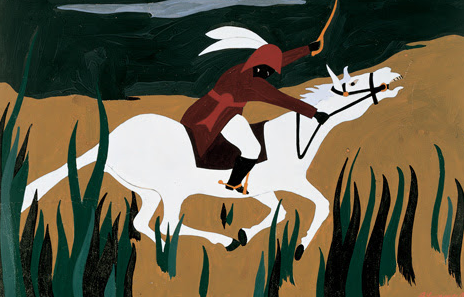 By Daniela Sol
A new exhibit just opened this Tuesday, February 7th at The Phillips Collection, a small gallery in downtown D.C., named “The Life of Toussaint L’Ouvertue” by the artist Jacob Lawrence.
In his series, Lawrence honors the life of Toussaint L’Ouverture, a famous Haitian political figure. A slave at first, L’Ouverture later became the leader of the Independence Movement in Haiti. The revolutionary is not just a prominent figure for Haitian Independence, but he was the first advocate to emancipate slaves in modern history. L’Ouverture lead the revolutionary fight against French colonies established in Haiti at the time, during the 1791 Haitian Revolution. The subjects of social justice and freedom are constantly seen in the works of Lawrence. Much of his art represents monumental historical figures such as L’Ouverture, as well as impactful historical events that changed the course of history for the better.
The exhibit consists of 15 rarely seen silkscreen prints created by the American artist, and will be open for the public at The Phillips until April 23, 2017. Lawrence worked on these unique pieces from 1986 to 1997. During this time the artist reduced his work from 41 panels to the 15 displayed at The Phillips. Lawrence’s initial series consisted of smaller sized prints than the final 15, which are much larger in scale. Originally, he used tempera paint as his main medium. He later worked with the D.C.-based master printmaker Lou Stovall to shorten the series and expand it as silkscreen prints.
Throughout the series of 15 prints you can follow L’Ouverture’s life from birth to slavery, to becoming general in the Haitian Revolution, and to his final capture by the French Army. In the pieces, you not only see the grand story of such an important figure for the abolition of slavery but Lawrence manages to incorporate the social injustices and political struggles that Haiti struggles with today.
Lawrence manages to do this because the prints, although they do portray a timeline and specific relation to L’Ouverture, also manage to stay versatile enough to represent the current situation in Haiti. He does this by keeping the silkscreen masterpieces minimalistic; composed by a combination of geometric figures, making his panels abstract and open to interpretation. The colors within the panels are symbolic of all the history behind them and keeps them modern and vibrant. In a combination of blues, greens and maroons, Lawrence transports you to a pivotal time in slavery’s history while at the same time showing you a unique interpretation of Haiti today.
This is not the first time The Phillips has supported the American artist. The gallery has previously sponsored the exhibition of 30 panels by Lawrence titled
“Migration Series.” The exhibit currently on display at the gallery is owned by Di and Lou Stovall. The exhibit is included in the museum’s general admissions ticket. The Phillips is located at 1600 21st Street, NW in D.C.