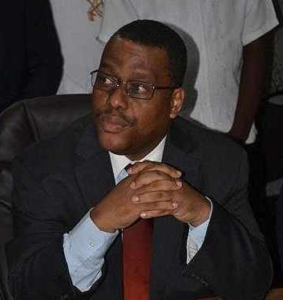 PETIONVILLE, Haiti — For months, Garry Conille worked behind the scenes to rebuild a broken, quake-ravaged Haiti. Now, as the man in charge of leading its next government, he wants to inspire hope.

“I want to be the guy who gets people excited about what we actually can achieve,” Conille told The Miami Herald in a recent interview. “If we can put together that reassurance and put together an exciting project that people can get behind — then start — we can buy time for development. My greatest fear is that if we don’t buy time, this country will explode in a few weeks, a few months.”

A day after Haitian senators confirmed Conille as Haiti’s next prime minister, the Haiti trained gynecologist and U.N. development and humanitarian expert, spent his day receiving congratulatory wishes — President Michel Martelly issued a statement shortly after the vote — and holding meetings. His new role came late Tuesday after more than eight hours of contentious debate by senators, days of confusion and difficult negotiations.

Conille, 45, faces a tough challenge in his new role. The months of political gridlock has stalled reconstruction, delayed voting of the budget, slowed public and private investments and birth growing disillusionment among an impoverished masses desperately awaiting change. Twenty-one months after the devastating Jan. 12, 2010 earthquake, Haiti remains in a humanitarian crisis with 594,811 people still living under tattered tents while a deadly cholera epidemic has left more than 6,400 dead and 455,700 infected.

“Things have to get moving,” said Philippe Armand, former head of the Haitian-American Chamber of Commerce, who welcomed Conille’s confirmation.

The international community welcomed the end of the impasse.

“I am pleased to see that the political uncertainty which lasted for several months has been resolved by the Haitian parliament, and work can proceed,’’ Albert Ramdin, assistant secretary general of the Organization of American States, told The Herald.

A husband and father of twin girls, Conille says he wants to reassure both Haitians and the international community about Haiti as he works to carry out Martelly’s promises of free education for all and reconstructing after the quake.

“Right now, there is so much tension, so much skepticism over what we can achieve that people don’t even want to put in any effort,” Conille said.

Conille, a Fulbright Scholar, holds a master’s in health policy from the University of North Carolina at Chapel Hill and has years of development and humanitarian expertise with the United Nations. Before Tuesday’s vote, he was the global body’s main man in the African nation of Niger where he has served as U.N. Development Program resident representative and humanitarian coordinator for the past three months.

All of that change in late August after he received the call from Martelly.

Still, it wasn’t easy. Daughters Soraya and Gaelle had just started a new school in New York, and wife, Betty Rousseau, the step-daughter of former Haiti prime minister and unsuccessful presidential candidate Marc Bazin, knew all too well the pitfalls of Haitian politics. So did Conille, who had seen Martelly’s two previous picks rejected by parliament.

“It really was a fight with my family,” he said. “It was really tense, the hardest part of it was getting them to agree with it.”

But as he mulled over the decision, a number of people reached out, he said, trying to make it possible for him to serve his country.

“How could I have said ‘no?’ Ten years from now, how can you look at yourself?” he said.

In the weeks leading up to Tuesday’s critical vote, Conille used his “down-to-earth” approach and practical sensibilities to reach across Haiti’s divisive political lines and classes. In meetings, he spoke of Haiti’s many realities, told fellow Haitians they have “a listening ear” and responded to criticism that his ties to the U.N. and former President Bill Clinton meant he was the blan’s – Creole for international community — candidate.

“The idea of that is ridiculous,’’ said Conille, pointing out that while he spent 10 months on U.N. special assignment as chief of staff to Clinton in his role as U.N. Special Envoy to Haiti, he’s worked for other leaders from around the globe. “I am not the candidate that the blan is sending back to Haiti. I am the candidate that Haiti strategically put inside the blan to better understand the blan and to come back and help Haiti.”

Even still, some question how effective Conille will be and his ability to be autonomous in the job.

“If Martelly is serious about succeeding, then he will have to respect the constitution and allow Conille to run the government with efficiency and transparency while abiding by the rule of law,” said Patrick Sylvain, a Haiti expert at Brown University in Rhode Island. “If Conille is there to serve the interests of the West, or small local and international interests instead of that of the country Haiti, he will fail miserably.”

Conille argues otherwise, but is accustomed to the criticism.

Some have questioned his lack of political experience, while others have raised suspicion about his political pedigree. He supported a group of Haitian leaders and professionals who opposed former President Jean-Bertrand Aristide’s rule, but said he did not support his ouster. His father, Dr. Serge Conille, was an influential minister in the Duvalier regime and as a medical student in the 1960s was a close friend of Roger Lafontant, the head of the feared Tonton Macoute secret police. They are often credited with helping dictator Francois “Papa Doc” Duvalier consolidate power by breaking up anti-Duvalier university students strikes.

Conille dismisses critics who claim his rise signals a return to Duvalierism. A protégé of U.S. economist Jeffrey Sachs, his political outlook is influenced by many, he said, including Bazin and Rwandan President Paul Kagame, who has transformed his country after the genocide.

“I want to sell a vision,’’ like Kagame, he said. “From a development standpoint, at the end of the day, no matter where you stand, we all agree that the emergency is getting children to school, stopping under 5 mortality, stopping women from dying from pregnancy-related causes, increasing the number of people who live off more than two bucks a day.”

And as he prepares for the next battle before assuming office — he must now form a government and present parliament with his plan for the country — Conille said he’s not interested in bringing “a whole bunch of pre-set solutions to problems,’’ or stacking his government with a bunch of technocrats. He wants honest and competent leaders.