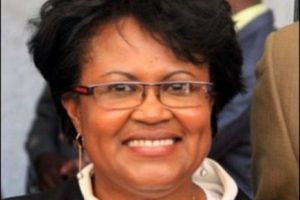 Haiti’s minister of finance and economy has resigned, effective immediately.

Marie Carmelle Jean-Marie sent her resignation letter to Prime Minister Laurent Lamothe early Wednesday morning, saying that she was leaving her role as the country’s economy chief. She has been in the job for about a year.

Nicknamed “the Iron Lady,” Jean-Marie worked in Cuba for eight years before giving up her residency there to return to Haiti in 2010. She is considered by many in Haiti and in the international community as one of the more credible and competent members of President Michel Martelly’s administration.

But her efforts to bring transparency to Haiti’s finances, initiate a large-scale reform of the management of the country’s finances and put Haiti on a path to macro-economic stability haven’t been easy.

Billions of dollars in promised pledges by the international community are still outstanding. Efforts to pass money laundering legislation have been stalled in parliament, threatening to make financial transactions between Haiti and U.S. banks much more difficult. Also, questions about the lack of transparency in government spending and social programs linger.

The most recent issue creating a stir among donors is a decision by the administration to issue $432 million in no-bid contracts after Hurricane Sandy last year. Lamothe has defended the decision.

Sources close to the minister told The Miami Herald that while she didn’t go into specifics about her reasons for quitting, she does point out that she no longer feels she has the support of her colleagues in her effort to provide responsible management of Haiti’s finances and economy.