If someone had poisoned New York’s water supply and killed 9,000 people, it would have been the most litigated public health disaster of all time. But when it happened in Haiti? Nothing. 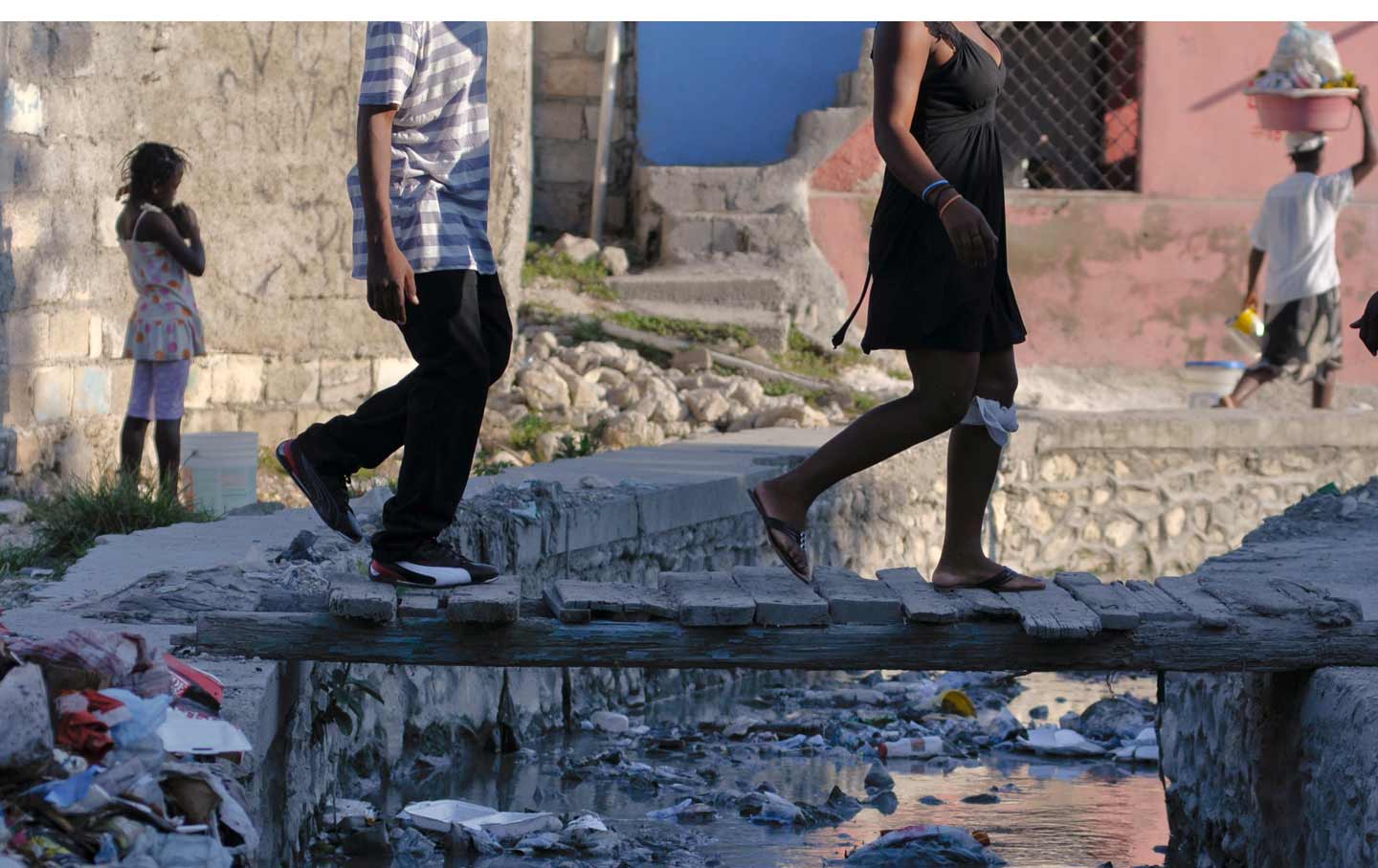 More of us know about the earthquake. But the cholera was worse.

Not in terms of sheer lives lost—although the epidemic claimed 9,000 lives and sickened one out of every 15 people in the country. The cholera was worse because it’s a human-rights tragedy.

While the earthquake originated as a natural disaster, albeit one made worse by generations of international exploitation, the cholera epidemic was a fully human-made phenomenon. It demonstrates that the world’s most powerful nation—the United States—and its most respected international organization—the United Nations—have no intention of treating the Haitian people as fully human beings, deserving of even the most basic of rights.

Cholera is a terrible way to die. The bacterium vibrio cholerae gets into water supplies via infected feces. Its victims suffer from diarrhea that experts and victims alike have described as “explosive.” Without quick treatment, a cholera patient can die within hours.

Thanks to modern water treatment systems, cholera is all but unknown in most of the world now. In the United States, physicians and public-health experts describe it as a 19th-century disease.

But most Haitians live without access to any kind of treated water, using river water for drinking and bathing. There are no municipal sewage systems, so waterborne diseases can be rapidly transmitted. When one international organization compiled a water-poverty index of 147 countries, Haiti ranked dead last.

In other words, Haiti’s infrastructure remains very much mired in the 19th century—and terribly susceptible to 19th-century diseases.

It didn’t have to be this way. In 1998, the Haitian government successfully obtained $54 million in loans from the Inter-American Development Bank—money earmarked to make much-needed improvements to the country’s water system. But the George W. Bush administration, angered by the left-leaning Haitian government then led by President Jean-Bertrand Aristide, blocked the loans. “It is reasonable to draw a straight line from these loans being cut off to the epidemic that emerged,” says Dr. Evan Lyon of the Haiti-based Partners in Health.

So when the cholera bacterium was introduced to the Haitian water supply five years ago this month, there was nothing to stop it from rampaging through the country with ruthless speed and impact.

But what, or who, brought cholera to Haiti in the first place? Haiti’s never had a shortage of woes, but the battered country hadn’t reported a single case of cholera in a century.

The outbreak’s origins turned out to be not much of a mystery.

On the Meille tributary to the Artibonite River in central Haiti, a camp housing UN soldiers sits a few hundred meters upstream from the homes of the first cholera victims. Even before the outbreak, local residents had been complaining about the UN’s dumping sewage into the river. Reporters visiting the camp in the days after the cholera saw an overflowing sewage tank—and a dark and foul-smelling liquid pouring from a pipe into the river. The area was enveloped by a pervasive stench.

The camp housed troops from Nepal, sent to Haiti from an area in the Kathmandu Valley where there’d been a recent outbreak of cholera. The UN, despite being well aware of Haiti’s vulnerability to water-borne diseases, failed to follow protocols for screening the troops for the disease. Later analysis of the Haitian cholera bacterium confirmed a match with the Nepalese strain. A UN study also acknowledged the camp’s sanitation was “haphazard” and the troops not properly screened.

It’s impossible to imagine the UN would behave so recklessly in a country where it respected the rights of its citizens, or at least feared its justice system.

The foundation of human rights and the rule of law is accountability, especially when a powerful individual or organization has harmed those unable to protect themselves. It’s worth taking a moment to reflect on the response if a similar devastation had been visited upon people who have the benefit of basic human rights.

What if an organization, private or public, had introduced a toxin into the waterways of New York City, killing 9,000 people? It would have been the most decried and litigated public-health case of all time. Apologies would pile on top of one another. Responsible parties would be summarily fired. Indictments would be handed down. Billions of dollars in reparations would be paid out.

The UN first baldly denied responsibility, then said it was not productive to talk about the outbreak’s origins. Claims filed by the victims against the UN were stamped with the bureaucratic brush-off “not receivable.” As for who was responsible, the UN spokeswoman in Haiti said, “From our point of view, it really doesn’t matter.”

The UN’s stated reason for resisting any discussion of responsibility for cholera was a desire to focus on preventing future outbreaks. It promised an ambitious water and sanitation infrastructure project, as well as a vaccine delivery plan.

For Haitians, this was a familiar response. Their country has long been considered an ideal target for charity—there are so many disconnected non-profit efforts scattered throughout the country that Haitians wryly refer to themselves as a “nation of NGOs.” Yet charity’s inadequacy as a stand-in for justice is well-demonstrated in the wake of the cholera outbreak: To date, the plan announced with great fanfare by UN Secretary-General Ban Ki-moon in 2012 has attracted less than a fifth of the necessary funding.

The Haitian cholera victims have now taken their claims against the UN to federal court in the United States. Their quest is backed by thousands of international human-rights activists, the Congressional Black Caucus, and even former UN officials. I signed a brief in support myself, on behalf of my law school clinic.

Unfortunately, adding insult to the injury the United States inflicted in blocking Haiti’s water system loans, the Obama administration has stepped into the lawsuit to defend the UN. The US government has argued that the UN enjoys absolute immunity from any responsibility for the devastation caused by its reckless sanitation practices. A US district court judge agreed, ordering the case be dismissed. An appeal has been filed, and the US Court of Appeals for the Second Circuit is reviewing the case now.

The irony is inescapable: The world’s foremost promoter of accountability and the rule of law has adopted the “Who, us?” posture of a 1950s tobacco company.

As devastating as this response is for the people of Haiti, it may be even worse for the future of human rights across the globe.

In the wake of its craven abdication of justice in Haiti, how can the UN’s calls for the enforcement of human-rights laws be taken seriously? UN advocacy on international human rights post-cholera may become as impotent as US calls for international due process post-Guantánamo. As the Haitian Collective to Mobilize for Reparations for Cholera Victims has asked, “What moral right does the UN now have to speak about human rights or democracy in Haiti or anywhere else?”

Five years after 9,000 people were killed and hundreds of thousands sickened, not a dime of compensation has been paid. No one has been disciplined. No one has even admitted responsibility. Whether by court order or political mobilization, it’s long past time for the international community to provide a just response to the Haitian people, through full compensation for the victims and rapid construction of a modern water treatment system.

Earthquakes are unavoidable. Human-rights tragedies are not.

Haiti has lost many more than 20,000 to cholera and the total climbs daily.

Google cholera and see what the mortality rates are.

People are still dead, no matter what the name.

“A rose by any other color.”