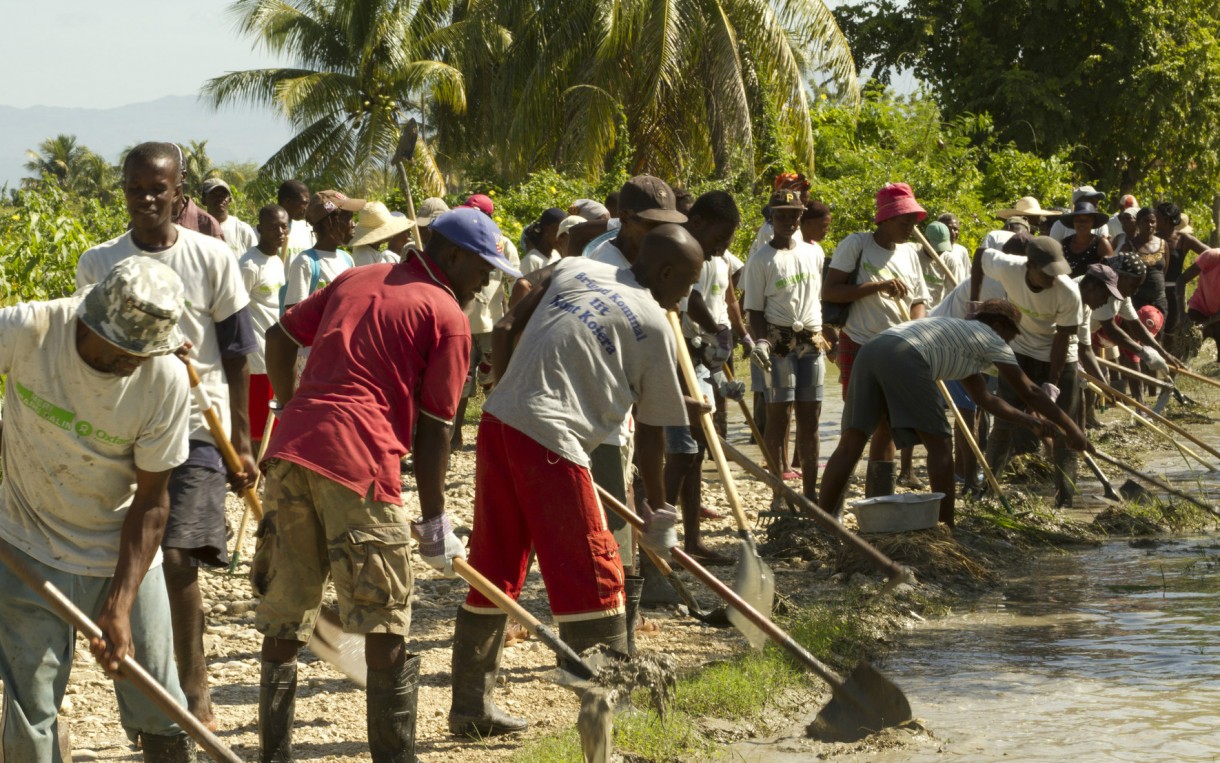 The mayor of Grande-Saline in rural Artibonite, Haiti enlisted support from Oxfam in 2011 to address flood control. Through a cash-for-work program, two 132-member work teams helped clean out drainage channels that serve about 2,000 people in the area. Photo: Chris Hufstader / Oxfam America

Marc Cohen is a Senior Researcher on Humanitarian Policy at Oxfam America.

If the devastating 2010 earthquake, a series of hurricanes, and the world’s worst cholera crisis weren’t enough, Haiti now faces a serious food emergency as a result of a punishing drought. It leaves one wondering this Earth Day: Is climate change worsening the cycle of storms, floods, and droughts that regularly batter the country?

Lack of rainfall has caused near total crop failure in Haiti’s impoverished Northwest Department (province), where over 40 percent of the households are considered food insecure and children face high levels of malnutrition even in “good” years. It is also the most vulnerable to drought of Haiti’s 10 Departments. Now, the UN World Food Programme has distributed emergency food aid to 164,000 people, mainly mothers and their dependent children, and Haiti’s Agriculture Ministry has provided seed assistance to 6,000 local farmers.

In Bas des Moustiques  (Mosquito Flats), a village in the Northwest, farmer Julia Sodietra said she had to go into debt to buy food. “I can’t pay school fees anymore for my children. Even buying clothes and shoes is impossible for me,” she added.

Other parts of Haiti have also experienced inadequate rainfall, including the West and Artibonite Departments, which are the country’s main food-producing  zones. A more widespread hunger situation may loom.

Climate change, food, and hunger in Haiti – all interconnected

Meanwhile, the Intergovernmental Panel on Climate Change (IPCC), the world’s main climate science forum, recently issued two new volumes of its Fifth Assessment Report. One of those, focused on impacts, adaptation, and vulnerability, lays out a series of “reasons for concern” due to severe risks posed by climate change impacts. These include increased food insecurity, the breakdown of food systems, and declining incomes for poor farmers.

How do these factors play out in Haiti? A new Oxfam research report on climate change resilience in Haiti finds that the country is extremely vulnerable to natural hazards in part because of its geography. The island of Hispaniola, which Haiti and the Dominican Republic share, lies on the main Atlantic hurricane pathway. Low-income people are particularly at risk, and in rural Haiti, that means just about everyone. Storms like Hurricanes Isaac and Sandy in 2012 caused big agricultural losses, as well as injuries and deaths.

Human activity has greatly amplified storms’ effects. It’s hard to make a living as a farmer in Haiti. Since the country imposes very low tariffs on imported food, poor cultivators working with hand tools on small plots are hard pressed to compete. In order to earn a little bit of cash, desperate rural Haitians have turned to making charcoal, the country’s main source of fuel. This has led to near total deforestation. So heavy rainfall means landslides from the denuded slopes that cover much of Haiti, as well as extensive flooding that often affects the Artibonite Valley, the main rice growing area.

Adding to these woes, there is already evidence of climate change. According to Haitian government figures, average temperatures have risen significantly since the early 1970s. Also, rainfall patterns have become erratic, with precipitation arriving much later than usual, or, as farmers in the Northwest saw over the past few months, not at all.

How can Haiti build resilience to climate change?

Expanding irrigated agriculture could help the country cope with droughts, but that requires money and labor to maintain the systems. The government has not put adequate resources into keeping up the existing Artibonite canals.

Happily, there are cost-effective steps that Haiti can take to build resilience to climate change. Besides irrigation, these include redoubled reforestation efforts, greater attention to flood control, and government promotion of energy alternatives. The country has ready access to renewables such as solar, wind, and tidal energy.

Haiti also needs to better support its system of community-based disaster management committees, which include local government and civil society representatives. Oxfam is helping to strengthen the capacity of these committees in the Artibonite Valley.

Since the majority of Haitians continue to rely on agriculture for their livelihoods, agricultural adaptation to climate change is particularly important. Haiti needs new agricultural practices, such as planting drought-tolerant crop varieties, and less farming on steep slopes that are prone to erosion. Expansion of agricultural processing enterprises would create job alternatives, increase economic activity in the rural areas, and offer new opportunities to rural women.

Above all, climate change needs to have a much higher place on the agenda of both Haiti’s policy makers and the aid donor community.