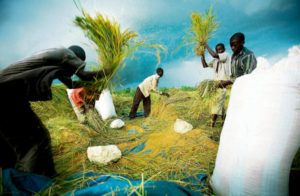 In the rice-growing Artibonite Valley, irrigation channels are a lifeline; Oxfam has been helping restore them to good working order.

When a massive earthquake struck Haiti in January, 2010, it shone a spotlight on the need to ease the dangerous overcrowding of the capital city of Port-au-Prince. So, after responding to disaster with emergency programs, Oxfam shifted some of our focus to the countryside. Together with our partners, we ramped up our program to reinvigorate the rice economy of the Artibonite Valley, with the goals of reducing rural poverty, contributing to food security in Haiti, and—by making rice farming more viable—counteracting the continuous pull to migrate from the country to the city. As Oxfam’s Elizabeth Stevens reports in a series of blog posts, Haiti’s rice farmers are embracing the program and making it their own.

The muddy water coursing along the roadsides and through the rice fields of the Artibonite Valley plays a central role in the lives of rice farmers.  Rivers and channels nourish the rice, the vegetables, the goats and cows, and the riot of greenery in the countryside.  But when storms and hurricanes strike, it’s those same waterways that overflow and carry away livestock, drown the crops, contaminate wells, and deliver deadly cholera bacteria to rural communities.

Oxfam and our partners have helped restore 4,700 acres of land to cultivation by clearing and repairing irrigation channels. Photo: Anna Fawcus/Oxfam

If the water moves freely through the channels—unimpeded by sediment, weeds, and debris—the risks subside, and the benefits can transform communities, which is why we’ve focused resources on helping farmers clear more than 60 miles of irrigation canals.

Dubuisson is one of the towns where we’ve been working, introducing methods of improving rice yields, providing access to low-interest loans, helping boost the vegetable harvest in the off season for rice, and—most  importantly—helping  residents restore the flow of water to fields that have gone dry.

Last month I sat down with farmers St. Amene Leon Terilus and Augustin Miradieu to talk about what their community has been up against and what’s changed since the Oxfam program got underway there in 2011.

Before, Terilus told me, “We were suffering a lot. We really didn’t have a lot to live on.” The rice farming that once sustained a community lost its viability over time and children bore the brunt. Some have skinny legs and big stomachs, she said, and they are smaller than they should be.

She told me about the strategies for survival they’ve relied on—growing what they can, saving and fixing whatever’s broken, and wasting nothing. “When we eat an animal, we eat the tripe, the head—everything but the feathers.”

And then there is the sharing: “People who have more means than we give us a bit; if I have something, I share it with someone who has nothing at all.”

Elizabeth Dieujuste of Dubuisson gathers rice seed for the next planting. Hunger is easing here, now that the community has been able to rehabilitate its irrigation channels. Photo: Anna Fawcus/Oxfam

What’s changed in the past year is that now there is more to share. With tools and a cash-for-work program, farmers have been able to clear out their irrigation channels and restore hundreds of acres of land to cultivation.

With irrigation has come food enough to eat and sell, and with that, a small step out of poverty.

“We are so happy,” said Terilus.

Cede Augustin, the president of our local partner organization and a farmer himself, talked to me of his lifelong dream of helping rural farmers enjoy the rights and opportunities they deserve—a dream he is beginning to fulfill. “With Oxfam here, the poverty in this area has diminished,” he said. “We are moving forward.”