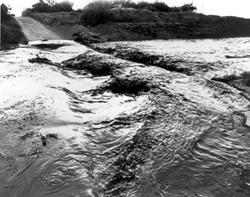 PETION_VILLE: 2000 Hours and the area is swamped by a wind-driven deluge that sends flood of turbulent water down slopes to inundate low-lying areas, such as the parks and football fields used for refugee tent camps. So strong  was the flood that it knocked people off their feet and rolled them along until they could regain safety. Large rocks were carried along in the new rivers that filled streets, some 9 or 10 inches in size.

Until you see a tropical downpour you can never imagine its force or wildness!

Perhaps this was the edge of Hurricane Earl, skirting the north side of Haiti.

Whatever it was, Haitians died in the storm while thousands of others lost what little they possessed – AGAIN!

The hurricane season has months to go and Haiti awaits the onslaught of at least one killer storm.

The coup de grace and Preval and his team stand by – ready to block any assistance the world might send.

Perhaps there is a message here – one that the international community should finally understand.

There can be no fair electoral process with Preval in power.

We must have a new Electoral Council (CEP)  and adequate international supervision.