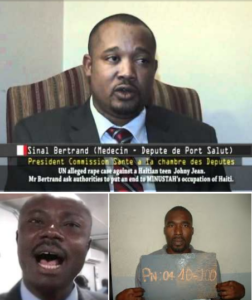 The trio has been under suspicion of alleged drug trafficking in the Port Salut/Cap Haitian areas for some time. Some suggest they were closely associated with arrests involving 50 kilos of cocaine during mid-September, 2013.

Evinx Daniel has not been see for almost a month.

Port Salut has been a focal point in the drug trade, with the Uruguayan detachment of MINUSTAH playing an important role, much to the disgust of local inhabitants who resent this intrusion in their business.

The Uruguayans have used their boats and helicopters for their cocaine movement.

We may have an important update on this article tomorrow-