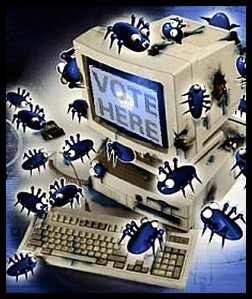 SENATOR YOURI LATORTUE SAYS PREVAL HAS SWAPPED ELECTORAL COMPUTERS WITH HELP OF PREVAL-CONTROLLED CEP CHIEF – MINUSTAH INVOLVED!!! TIME FOR INTERNATIONAL COMMUNITY TO TAKE NOTICE – FIXED ELECTIONS WILL NOT BE ACCEPTED – VIOLENCE WILL FOLLOW – MANY WILL DIE.

It is time for the International Community to stop and smell the roses.

The Preval/MINUSTAH team is playing an open and obvious game to steal the Presidential elections, along with those for the Parliament….and no one says a thing. Everyone mouths the phrase…”free-and-fair-elections”… as though this mantra will solve all ills…even when Preval and Edmund Mulet are openly and obviously fixing the election.

Any outcome – like the fraudulent elections of 2005 in which MINUSTAH (Brazil/Chile) increased Preval’s 23% to 51% in order to avoid a constitutionally mandated run off –  must be challenged.  In 2005 Baker and Manigat were not vocal enough about the theft of their votes and the nation has paid the price: YEARS OF PREVAL CRIMINAL  INCOMPETENCE.

They had a debt to to the nation then, but preferred muted comments.

And now they expect to have the Presidency!

There is an obvious game to present a false picture to the world. Boulos runs false polls that ignore the Ceant popularity and suggest Manigat/Baker lead the field. This is not true and, if used to place Manigat in the presidency, could lead to open revolt.

The Haitian majority is sick and tired of being cheated.

The Haitian majority is disgusted by their treatment after the 2008 hurricane disaster as Preval and his team stole $198,000,000 from PETROCARAIBE funds..set aside for hurricane relief.

The Haitian majority is disgusted with the way Preval and MINUSTAH failed to act after the January 12 earthquake.

The Haitian majority is disgusted at the way Preval/MINUSTAH have handled the cholera epidemic, an epidemic caused by MINUSTAH criminality and Elizabeth Delatour, Preval’s wife.

The problems in Cap Haitien were ignited by Preval associate Senator Jean-Charles Moise who recognized the populations disgust and used their momentum to create a ground-swell.  Edmund Mulet MINUSTAH chief, tries to blame other elements, but the element responsible is Preval controlled, probably controlled with the cooperation of Mulet himself.

Mulet has taken money from Preval, starting in 2006 when he first served in Haiti.

The imbecile Secretary General Ban Kee Moon has continually stated that Preval is the only hope for Haiti. We have Preval’s ex-mistress Michele Montas responsible for this as Spokesperson for the UN, until  fired at America’s request.

Mulet’s  MINUSTAH teams were on Petionville streets, last Sunday, standing in front of MINUSTAH marked vehicles, urging Haitians to vote Celestin.  Come on guys! Enough is enough! Someone has to step up and do something to stop this ongoing crime against the Haitian people!

It is time to step in and guarantee a truly free-and-fair election.

For once the Haitian majority should be heard.

There has been a generation of meddling in Haitian affairs.

Let the people decide on their own…for the first time!!

The UN is lucky this isn’t Ireland. If Ireland was faced with these intrusions the population would have reacted long ago with direct, persuasive realities.