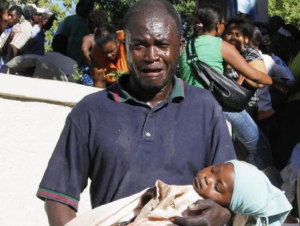 Dimitri Vorbe is in control of customs at Haiti’s International Airport.  Of course, this is illegal but it would not have become public – international knowledge –had it not been for a particularly stupid move, even for President Preval.

The Mexican Government sent a big load of medical supplies for the Haitian people. It was stopped at the airport by Dimitri Vorbe who said it could not enter the country without a paper from President Preval.

Now a lady named Roy was behind the shipment. She is Haitian and happens to be married to a major Mexican journalist.

The journalist created   a huge media scandal in Mexico.  Bob Manuel is Special Envoy for Preval in Mexico. The scandal caused him a great deal of embarrassment

The supplies were released but this simply uncovered a major criminal conspiracy headed by President Preval, Dimitri Vorbe and Elisabeth Delatour-Preval.

As a passing comment, Delatour serviced the father of Dimitri for a period of 6 years, before his death a short time ago. She also serviced a Brandt. There is nothing more dangerous than the legendary “scorned woman.” Delatour had Brandt arrested on baseless charges of false documentation with regard to an imported truck – and held in a nasty jail cell, with his son, for a period of time.

They were forced to poo in a plastic bag since their room had no toilet.

Now she is servicing Preval.

Who is next in line at the lady’s service station? Pas de credit, pas de cheque…she is a cash only business enterprise.

This Delatour/Vorbe/Preval association explains why Dimitri Vorbe has been made controller of the customs at the airport. He is Preval’s tool in the efforts to block the inflow of aid.

Some suggest Preval is in control of the cocaine traffic. Vorbe’s presence at the airport makes sense, if this is the case. Vorbe is there to facilitate this criminal activity.

A leopard does not change its spots. Preval’s first presidency saw cocaine traffickers coming to the palace. From here they were driven to the docks – in President Preval’s personal vehicle –  to collect their cocaine kilos. The driver returned them to the Palace where they paid their “tax.”

This explains why a major businessman like Vorbe would take a job at the airport. Money, money and more money which is the motto of the Vorbe family in general with absolutely no consideration of any moral factor. Morals are for the naïve and simple minded.

He is selling the food/medicine. He provides inflated receipts/billings to Preval and they share this additional windfall.

Vorbe stops food and medicine at the airport. This also gives him access to food and medicine that he sells in another criminal activity. Vorbe has a commission on everything. If he doesn’t, Vorbe will move to block other projects.

A case in question involves a 2 megawatt generating facility provided by the International Community. It was put into service, providing power to a number of quake victims’ tent cities. Vorbe is in the power business and moved to block this supply of power to poor, homeless, injured quake victims displaying the Vorbe family’s complete and total lack of public conscience.

The International Community knows of the Preval plundering of the Gonaives relief projects in 2008.

It knows of Preval’s recent theft of $198,000,000 from the Petro Caribe Fund for support of the Gonaives/Cabaret restoration.

It knows of last week’s theft of $90,000,000 provided by Latin American countries for the quake.

It knows of the Vorbe crimes at the airport and yet no one says anything.

If the Preval plague is allowed to exist without corrective action – there is absolutely no hope for Haiti. The country will die and tens of thousands of additional Haitians will follow the 300,000,  now counted, into the mass graves.

There can be no impunity!!

The guilty must be judged!

Preval, Delatour, Vorbe and his criminal cabal cannot be allowed the normal escape into exile with their stolen fortunes. The International Community should cancel visas and force them to remain in the nation they have destroyed. The Haitian people will settle the score.