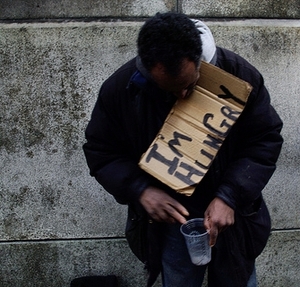 More than 18 percent of Americans say there have been times this year when they couldn’t afford the food they needed, according to a Gallup poll released on Tuesday.

That plight could grow because of the country’s worst drought in half a century. The U.S. Department of Agriculture warned last month that Americans should expect to pay 3 to 5 percent more for groceries next year because of the drought.

“While Americans are no more likely to struggle to afford food thus far in 2012 than in the past, more residents may face problems as the drought-related crop damage results in a shortage of inputs in the food supply and begins to affect retail prices,” the Gallup report stated.

The Gallup findings come from telephone surveys conducted with 177,662 U.S. adults from January through June 2012. They asked 1,000 Americans each day if there have been times in the past 12 months when they did not have enough money to buy food that they or their families needed.

The worst responses came from Mississippi, where one in four residents reported struggling to put food on the table.

From the Gallup study:

Gallup said the 18.2 percent of Americans who so far in 2012 reported having problems is on par with the 18.6 percent who had trouble affording food in 2011. FeedingAmerica.org says one in six people in the U.S. goes without food for several meals or even days.

Financial lenders worldwide are also alerting countries to prepare for a possible spike in food bills in the coming months, Reuters reported on Tuesday. 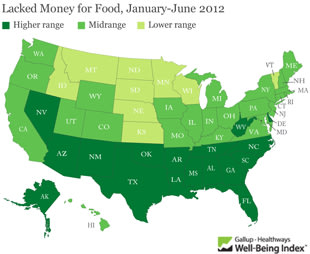 “We are not saying that we anticipate a major crisis at this point,” said Juergen Voegele, director of the World Bank’s Agriculture and Rural Development Department. “The world has enough food, but of course we cannot predict the weather and if something extraordinary happens we might find ourselves in a difficult situation again.”

Coincidentally, a separate report also released on Tuesday states that Americans are throwing away 40 percent of food in the United States. The Natural Resources Defense Council says that’s the equivalent of $165 billion in uneaten food each year.

“As a country, we’re essentially tossing every other piece of food that crosses our path—that’s money and precious resources down the drain,” said Dana Gunders, NRDC project scientist with the food and agriculture program. “With the price of food continuing to grow, and drought jeopardizing farmers nationwide, now is the time to embrace all the tremendous untapped opportunities to get more out of our food system. We can do better.”

The NRDC report outlines numerous ways to reduce wasted food. Among them: