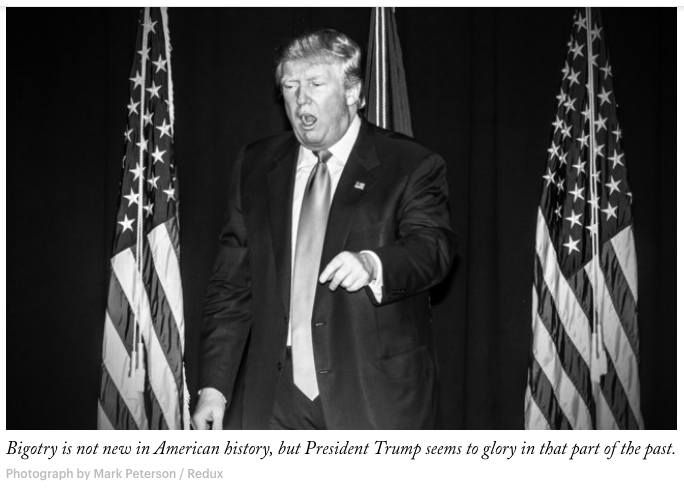 What is the difference between calling countries in Africa, the Caribbean, and Central America “shitholes,” as President Donald Trump is widely reported to have done, and saying, as he did on Twitter, that he had been “tough” but hadn’t used that precise language? Not much, really. It is only a reminder that the President’s dishonesty is in close contention with his bigotry in the contest for his most distinctive characteristic. His crudity is in the race, too. Trump is confounding and often self-contradictory, but in this case he is neither mysterious nor subtle.

This particular story began on Thursday, when the Washington Post reported that, in a meeting about immigration policy with several senators of both parties, Trump interrupted a discussion that involved Africa, as well as El Salvador and Haiti, to say, “Why are we having all these people from shithole countries come here?” In particular, when he learned that a certain proposal might lead to green cards for people from Haiti, he asked, “Why do we need more Haitians?” and added, “Take them out.” He also wanted to know why there couldn’t be more Norwegians coming over instead. The Norwegian Prime Minister had visited the White House the day before; perhaps her air of prosperity had impressed him. More likely, it was just a close-at-hand example of a country whose residents were mostly white. It is telling that other major media outlets had no problem confirming the story with their own sources. Nor did any of the Republican legislators there hurry to defend him. Senator Dick Durbin, Democrat of Illinois, who was present at the meeting, confirmed on Friday that Trump had not only “said these hate-filled things” but had also repeatedly used other words that were “hate-filled, vile, and racist.”

The first statement from the White House did not deny the remarks; it just attacked “certain Washington politicians” who were, as the Administration saw it, fighting for “foreign countries” rather than for America. It was a reminder of the ways in which President Trump appears to view many entirely American communities as foreign. The White House statement went on to say that he wanted an immigration system based on “merit”—which was defined as, among other things, an ability to “assimilate into our great nation.” Is assimilation, in Trump’s view, a matter of commitment to the country—of patriotism—or of having a certain skin color, or religion? If you look the part, as Trump defines it, do you get the visa? Trump, in his past speeches on immigration, has rejected the idea that certain groups can ever assimilate—“Sometimes, it’s just not going to work out,” he said on the campaign trail—and has warned that immigration policies should favor people who “love” us, by which he may mean people who love Trump.

None of this is new to Trump. In announcing his candidacy, he talked about the drug dealers and the rapists Mexico was supposedly sending to America. While running for President, he questioned whether the Fourteenth Amendment really meant that children born in the United States to parents from places he didn’t approve of—shitholes, presumably—were citizens of this country. (It does; they are.) He has pushed scares about “anchor babies” and derided family reunification, which is part of the family story of countless Americans, as “chain migration”—both metaphors conveying the notion that immigration is a weight, a shackle, an entangling burden holding America back, rather than the engine that has, and with any luck always will, propel it forward.

Trump, in his version of the meeting, spread over numerous Friday-morning tweets, complained that the “wall was not properly funded, Chain & Lottery were made worse and USA would be forced to take large numbers of people from high crime. . . .”—there was a break between tweets here—“countries which are doing badly.” And, because he rarely misses an opportunity to accuse others of bad will, he added that the problem with dealing with protections for Dreamers and military spending and maybe everything else was “Democrats not being interested in life and safety.”

In a tweet the night before, he had insulted the South London neighborhood where a new United States Embassy is located—he prefers the previous location, Mayfair—and announced that he was cancelling a trip that hadn’t actually been scheduled, because he didn’t approve of the deal or new building. (“Wanted me to cut the ribbon-NO!”) But his ability to deride Western European allies and undermine foreign relations for the pettiest of reasons should not be taken as a sign that he is, as his apologists like to put it, an equal-opportunity insulter. The tweet also blamed Barack Obama for the London deal, which was initiated by the Bush Administration.

When Trump said, on Twitter, that his language was not as reported but was “tough,” one could only think of how he introduced his proposal for a “complete and total” ban on Muslims coming into the country to a cheering crowd at a rally in South Carolina in December, 2015: “Pretty tough stuff.” It is not nice that the President uses words like “shithole,” but that’s hardly the most serious problem. It’s that he speaks of and treats people of different races and religions, and also those who are simply not as fortunate as he is, in terms of the circumstances of their birth, as trash and waste. He sees “wretched refuse,” to borrow Emma Lazarus’s phrase, without having any conception of the respect and welcome, and the defiant pride, with which a nation of immigrants ought to imbue it. This is a matter of policy and not just, as some Republicans would have it, his rough style. That he also reportedly suggested that people in some Asian nations might be rich enough to merit a visa does not change that assessment; indeed, it amplifies it.

Such bigotry is not new, of course, in American history—it was central to the enslavement of millions of African-Americans, the denial of citizenship to Chinese-Americans, the internment of Japanese-Americans, and the scorn that earlier generations of immigrants faced. But Trump seems to glory in that past, whether in his remarks sympathizing with white supremacists in Charlottesville or in his interest, with regard to Guantánamo, in detention without due process. His dishonesty encompasses both the actual attributes of other countries and people and his own words.

“Never said anything derogatory about Haitians other than Haiti is, obviously, a very poor and troubled country,” Trump tweeted on Friday. (In December, the Times reported that, at another immigration meeting, he had described Haitians as all having AIDS.) The tweet continued, “Never said ‘take them out.’ Made up by Dems. I have a wonderful relationship with Haitians. Probably should record future meetings – unfortunately, no trust!” There is, indeed, no trust in the White House or around it. Instead, there are lies, and there is racism.

This guy really has no shame.

Democratic and Republican Senators sitting with him, along with others, all of whom say he said what is claimed.

And Trump now denies it.

Kids used to get their mouth washed out with soap for such actions.