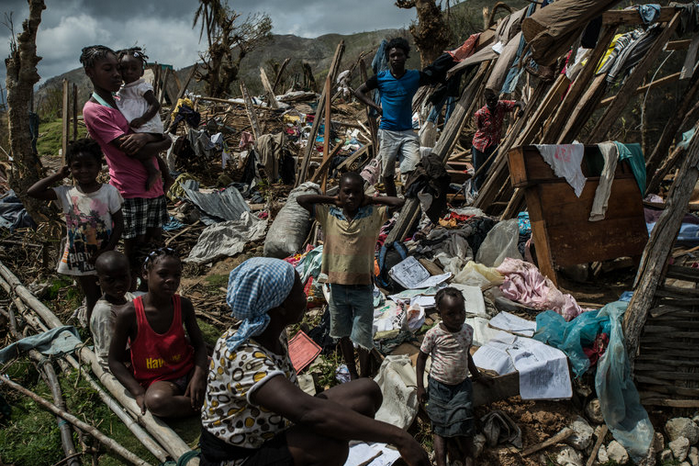 A family in Haiti trying to salvage what was left of their belongings after their home was destroyed by Hurricane Matthew. Credit Meridith Kohut for The New York Times

Tens of thousands of Haitians living in the United States are facing an ominous deadline. The temporary protected status that has allowed them to live and work here legally since 2010 — the year an earthquake devastated their country and left them unable to return safely home — is set to expire on July 22. Unless the homeland security secretary, John Kelly, decides to renew it, about 50,000 Haitians will lose their welcome here and be vulnerable to deportation.

A reasonable person might say: The United States couldn’t do that. Haiti has made only a fitful recovery from the quake, which all but destroyed the national government and left hundreds of thousands homeless, and ensuing disasters have deepened the country’s misery. Hurricane Matthew in October 2016 ravaged Haiti’s southwest peninsula, killing more than a thousand people and laying waste to villages and farmland. A cholera epidemic that erupted after the earthquake has not been subdued.

These acute crises, laid atop chronic poverty and political turmoil, make Haiti a fragile place. The sudden return of tens of thousands of expatriates would be yet another damaging blow. Better those Haitians remain in the United States, where they can be safe and work and send money home, and not further burden their traumatized homeland.

That is a reasonable conclusion. But not everyone in the Trump administration recognizes it. The acting head of Citizenship and Immigration Services, James McCament, wrote to Mr. Kelly this month recommending that temporary protected status be ended next January.

“Although Hurricane Matthew recently caused a deterioration of conditions in Haiti’s southwest peninsula,” he wrote, “over all, circumstances in the country have continued on an upward trajectory since the 2010 earthquake.”

Give that man a prize for bureaucratic understatement: “Deterioration of conditions” is a brutally antiseptic way to describe a Category 4 hurricane that left so much death, sickness and hunger in its wake. In fairness, Mr. McCament’s memo does acknowledge many of the other afflictions that would argue for temporary protected status, including homelessness, gender-based violence, food insecurity, deep deficiencies in sanitation and health care, and a weak government.

And yet it reached the wrong conclusion. Only in December, in President Barack Obama’s administration, the State Department examined the same circumstances and recommended that the Haitians be allowed to remain.

Temporary protected status is where United States law joins practicality and humanitarian compassion. Mr. Kelly may make his decision by May 23, 60 days before the expiration date. Before he decides to send them back — and, given the Trump administration’s coldblooded approach to destitute migrants the world over, who knows what he will do? — we hope he considers what advantage there could possibly be in sowing greater instability in Haiti, deepening its poverty and subjecting so many people to such pointless cruelty. Rather than make a desperate situation intolerably worse, he should extend America’s welcome to the Haitians once again.