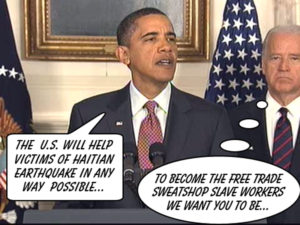 The Obama Administration has caved in to the demands of another group of illegal immigrants, allowing them to remain in the United States because the economy is “sluggish” in their native country and a cholera epidemic has struck thousands.

Nearly three years after the earthquake in Haiti, Homeland Security Secretary Janet Napolitano announced that she’s allowing tens of thousands of Haitians to stay in the United States under protected status. A south Florida newspaper reported the story this week since the majority of the Haitians live in the region. The Department of Homeland Security (DHS) is expected to publish a notice in the Federal Register in the coming days.

The move comes on the heels of a separate plan to spare nearly 1 million young illegal immigrants from deportation. Under that measure illegal aliens under the age of 30 who came to the U.S. as kids will have a chance at U.S. citizenship and all sorts of other taxpayer-funded benefits. Secretary Napolitano claims they deserve it because they are “young people brought to the United States through no fault of their own as children.”

Her latest plan will allow at least 60,000 Haitians who should be deported to remain in the country for at least another year and a half. This happens under a special Temporary Protective Status order that keeps getting extended by the Obama Administration. The first TPS for illegal alien Haitians who could not be deported because of the earthquake came in 2010. In 2011 it got extended and this week the administration extended it for a third time.

Haitian advocates say it’s not enough, that the U.S. government discriminates against Haitians and has a double standard when it comes to granting them amnesty. The group behind the push for TPS, Haitian Women of Miami, is also trying to get discounted in-state college tuition for the illegal aliens from Haiti who can’t afford an education because they’re “being charged prohibitive out-of-state tuition.”

Haiti has long been the poorest country in the western hemisphere but the U.S. has been a generous donor, in fact its largest since 1973. The money really poured in under Bill Clinton and the flow hasn’t slowed much. This year alone Uncle Sam has allocated nearly $8 billion for Haiti, according to State Department figures. This includes funds for food, economic security, health and other basic needs.

Additionally, U.S. and international charities raised huge sums of money for Haiti earthquake relief efforts.  Dozens of groups and their affiliates raised $2.1 billion, according to the Chronicle of Philanthropy, and more than half ($1.43 billion) came from Americans. Additionally, a group of famous singers joined forces to record an album (Hope for Haiti Now) that quickly raised tens of millions of dollars for earthquake relief.

Used with the permission of Judicial Watch.