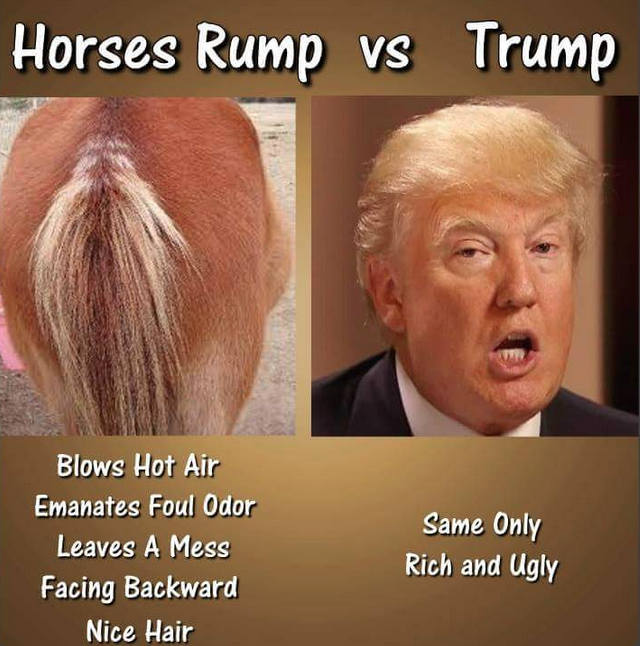 We know we just brought you a whole bunch of dumb submissions to our comments section Sunday, but darned if we could wait for the weekend to run these latest effusions of derp, from some wingnut named “Donald T.” in Washington DC. The comments were made in June, but just came to our attention this weekend, and they really give you some insight into the mind of a habitual troll.

Seems ol’ “Donald” was on his way to a meeting about immigration — running late, even though he was the one who called it — and he was pissed about all the various foreigns coming to the USA. He apparently had heard from some of his friends that he looked like a fool. You know how it is, some people just can’t take criticism. Then, just as the meeting was about to start, his buddy “Steve Miller” handed him a document listing how many immigrants had gotten visas to come to America, and that’s when he got all pissy. Here’s how the drama played out in the Oval Office comments section:

More than 2,500 were from Afghanistan, a terrorist haven, [“Donald T”] complained.

Haiti had sent 15,000 people. They “all have AIDS,” he grumbled, according to one person who attended the meeting and another person who was briefed about it by a different person who was there.

Forty thousand had come from Nigeria, [“Donald”] added. Once they had seen the United States, they would never “go back to their huts” in Africa, recalled the two officials, who asked for anonymity to discuss a sensitive conversation in the Oval Office.

A couple of the other longtime commenters, “Rex” and “John K,” tried to calm “Donald T” down, pointing out that a lot of the visa-holders were just short-time visitors making one-time trips, but then the whole thing turned into a flame war, with “John” and “Steve” joining in blaming “Rex” for the whole stupid mess, because wasn’t Rex supposed to be the expert on foreign policy and foreigners and stuff? (We did some checking, and we learned this “Rex” guy actually worked in the oil business anyway, so don’t believe every online claim of expertise you hear.) Eventually the moderators stepped in and the whole thing died down.

We’ve seen plenty of dipshits in the comments before, but this guy isn’t even original. Afghans are terrorists, Haitians have AIDS, and Nigerians live in huts? Not surprisingly, now “Donald T’s” online supporters are claiming he never said any of that ignorant Mean Girl crap, but we’ve checked this “Donald” guy’s comment history, and it all seems perfectly in character. The guy makes fun of people with disabilities, suggests that lady senators are hoors, dismisses Russian interference as a hoax, and seems to get all his news from Fox & Friends.

And yes, he’s ranted about foreigners bringing disease to America before, too. Back when the Wingnuttosphere was freaking out about Ebola, “Donald T” was singing along with the chorus:

Now, don’t go doxxing him or anything, but we did some looking, and would you believe this guy’s wife is actually “imported” herself — only from eastern Europe, so he’s fine with that. Pretty clear he’s only afraid of “deadly diseases” when it comes to immigrants who are too brown.

Honestly, you could probably go through the guy’s comment history and find something stupid he’s said on every topic, ever. No, he doesn’t notice when he contradicts himself, either. How’s this for some ALL_CAPS delusional thinking?

But what has he said himself during Sacred Baby Jesus seasons past?

In any case, the troll has been banhammered, and we doubt we’ll be hearing from him any more.