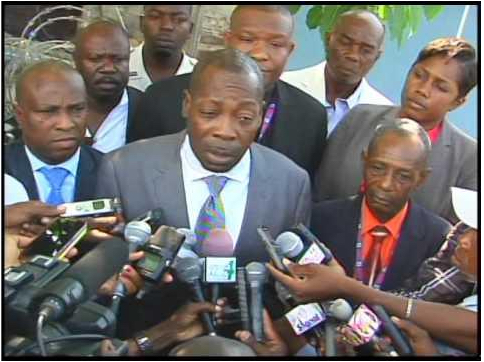 When Newton Jean Juste criticizes Danton Leger’s actions as being intemperate, we know Leger is way out of line!

Originating in Leogane, Leger is known to that city as a mentally unbalanced alcoholic who roams the streets, at all hours, in a clairin-soaked craze, screaming obscenities and threatening people. People are frightened and avoid Leger when he is in his drunken rages – which is often. In a civilized society Danton Leger would be institutionalized, retained in a padded cell so he wouldn’t harm himself, or others.

Instead, Leger takes his rabid instability onto the Nation’s stage, as the  perverted Privert Presidency sees Danton Leger placed in one of Haiti’s key positions:

In a Nation that has had people like Casimir, Jean-Baptiste and, recently,  Jean Renel Senatus,  as Commissaire du Gouvernement –   the appointment of Danton Leger is an insult to this key office, and the people it serves. Leger’s blatant bias trivializes and diminishes the office’s reputation as arbiter of society’s legal structure.

The office of Commissaire du Gouvernement has been reduced to that of a low-class political weapon, a sledgehammer against anyone not following the  Lavalas philosophy.  Leger should have been judged, by this office, not sit in erratic, biased, basically illegal  judgement of others.

Leger’s  political motivation is embarrassing in that Danton Leger has a singular focus upon the Martelly/Lamothe/Paul team,  to the exclusion of all others.

You will not see Leger arresting the guy standing next to him in the photograph at the top of this article. The midget Assad Volcy is a killer, among other socially unacceptable traits. Volcy is also a rabid Moise Jean-Charles/Aristide terrorist who marches to Privert’s drummer.

You will not find him re-arresting the escaped convict, and killer Arnel Belizaire.

Belizaire still walks the streets with an illegal assault rifle and promotes defamatory   anti-Martelly/Lamothe/Paul lies from his Radio ZENNITH.  The fact that Radio ZENNITH is still on the air, transmitting dangerously disruptive propaganda,  can be blamed on the easy-going approach Martelly took towards those who shot at him in the media.

There are laws against what ZENNITH  does.

The station – and some others – should have lost their licenses.

Now, you have Leger asking his criminal associate Belizaire for information with regard to rumored infractions of the law by members of the Martelly/Lamothe team. Leger will use the lies, transmitted by ZENNITH, as legal evidence in court actions.

Belizaire can get away with murder, (at least once in Les Cayes where he killed one and crippled another) while Leger will issue a Mandat or Interdiction Order against some Tet Kale functionary for tossing an empty water bottle from his car.

This is not surprising since Leger, Arnel Belizaire, Assad Volcy and a band of other criminals supported the violent candidacy of Moise Jean-Charles.

If Danton Leger was the anti-crime Commissaire du Gouvernement he claims to be, his office would have focused upon the governments of Aristide and Preval.

These two criminals raped and pillaged our Nation through 4 presidential cycles – interrupted, once in a while, when the people could tolerate Aristide’s violent chaos no longer.

Rape and kidnapping were potent political weapons, during their terms in office. Political assassination was the norm.

There are real criminals out there, walking our streets, sitting in government, enjoying society.

For example: How about an Interdiction Order/Mandat for Charles Castel, ex -Governor of the Central Bank. Under Preval he manipulated Petrocaraibe for Preval/Bellerive WITH THE ASSISTANCE OF PRIVERT, to see several hundreds of millions US stolen.  His recent illegal, unauthorized devaluation of the gourde has left our economy in chaos. Probably cost the Nation $500,000,000 over the following 12 months.

How about Mandats for both Aristide and Preval?

The Martelly/Lamothe team never killed anyone.

Same cannot be said about Preval or Aristide.

Danton Leger has been appointed with one basic mission. The alcoholic, mentally unstable Leger is there to create chaos and discredit the Martelly/Lamothe/Paul team in any and all ways possible.

Throw him a pint of clairin and he will be happy.

Interdiction orders – where none should be issued – have the desired effect, creating a perception of “where there is smoke, there is fire.”

Tell a lie often enough, and it becomes Truth.

This, in parallel with the Privert/Berlanger duo’s effort, will work to contaminate our electoral process. This team will create lengthy delays, until our situation evolves into one in which a LAVALAS candidate can be elevated to the top of the heap.

And then, the Nation will have died.

Danton Leger, alcoholic, unstable, Lavalas fanatic serves his Lavalas masters to perfection. Delay is their goal and delay, confusion, fear, disorder is what Leger is delivering.  People will concentrate on the Leger circus and miss the underground activities, aimed at stealing the election.

OUR SURVIVAL IS IN JEOPARDY!

DEMAND AN IMMEDIATE VOTE FOR THE PRESIDENCY!!!