IF THERE is one country in the Americas that cannot afford to suffer a natural disaster, it is dirt-poor and politically fragile Haiti. In 2008 four tropical storms killed 800 people, left 1m of the 9m population homeless and wiped out 15% of the economy. But the earthquake that devastated the country, including Haiti’s capital, Port-au-Prince, just before 5.00pm on January 12th was a yet crueller blow.

Many died—how many nobody will know until Haiti’s people and the rescue workers who began arriving the next day have completed the grim task of picking through the choking mounds of rubble and concrete. But by the morning of January 14th they were talking of tens, if not hundreds, of thousands of lives lost as schools, hospitals, houses, offices, shops and the cathedral and the headquarters of the United Nations mission collapsed in those 45 murderous seconds. The president, René Préval, as stunned and dazed as the people seeking refuge in the streets, said simply, “It is a catastrophe.”

Seismologists have long worried about the island of Hispaniola (shared by Haiti and the Dominican Republic). It sits on the Gonave microplate, a small strip of the earth’s crust squeezed between the North American and Caribbean tectonic plates. This makes it vulnerable to rare but violent earthquakes. The Dominican Republic suffered a serious quake in 1946. But the Enriquillo-Plantain Garden fault which separates the plates on the Haitian side of the border had been accumulating stress during more than a century of inactivity.

When it finally struck, therefore, the earthquake was all the more violent. They could feel the shaking as far away as eastern Cuba. It was followed by a series of powerful aftershocks lasting into the following day. Two things magnified its destructive power. Its epicentre was just 15 miles south-west of Port-au-Prince and it began only eight miles below ground. As a result, the millions who live in south-western Haiti were open to the quake’s full force when it reached the surface.

And the region is hopelessly ill-suited to withstand a shaking. Most of Port-au-Prince’s 2m residents live in tin-roofed shacks perched on unstable, steep ravines. In the centre of the capital and the neighbouring towns the buildings are too often made of weak concrete, cut with sand and lacking the steel rods that would fortify them against shocks. After a school collapsed in the suburb of Pétionville in 2008, the capital’s mayor said that 60% of its buildings were shoddily constructed and unsafe even under normal conditions. That smaller tragedy bodes ill for the multitudes trapped under rubble today: scores of people in the school died because the government could not free them quickly enough.

No one yet knows how widely the earthquake’s devastation has spread. There has been almost no news from the towns outside the capital, nor from the remoter areas that may have suffered landslides. But if the terrible scenes in Port-au-Prince are any guide, the suffering has been on a sickening scale.

Dead bodies littered the pavements, sometimes numbering dozens on a single block. Ambulances, more concerned with saving the living, had to swerve to avoid them—and when the injured reached clinics and hospitals, often carried by hand on stretchers improvised from splintered doors and anything else that came to hand, they joined a long, subdued queue waiting patiently for help.

Back on the streets, human limbs protruded from destroyed buildings, while muffled cries from victims trapped within filled the thick air. The screams and wails of the injured and mourning mixed with prayers and hymns from dazed, disbelieving survivors caked in dust and blood.

The physical destruction was almost as shocking. Entire hillsides that had been packed with slums had been swept bare. No landmarks were spared. The magnificent white rotunda of the presidential palace caved in, as did part of the parliament building, the roof and sides of the national cathedral, the offices of several international aid agencies and the Hotel Montana, a haunt for tourists. Telecommunications, power and running water failed. Although Mr Préval was not in the palace and escaped injury, he said that his home had been destroyed and he did not know where he would sleep. The capital’s main jail split open, leaving thieves, rapists and murderers to join the pain, hunger and disease that are stalking the streets. After dark the only light came from fires near the shoreline, though it was dimmed by a cloud of dust. Even people whose homes remained whole chose to sleep outside, lest they be caught in another aftershock.

One task now is to count the dead. Mr Préval said it was too early to provide a figure, but that he had heard estimates in the tens of thousands. Foreign governments and agencies were the first to confirm their losses. The Hotel Christopher, where the UN has its headquarters, collapsed with over 200 workers inside. Two days after the quake, 14 were confirmed dead and 56 injured, and most of the rest, including the head of the mission, remained unaccounted for. At least 16 UN peacekeepers also perished. The Roman Catholic archbishop died as he attended a conference with some 100 ordained or aspiring priests. Kely Bastien, the president of the Senate, survived the quake but was trapped in the destroyed parliament building for a day before being evacuated to the Dominican Republic.

Financial assistance also poured in. The World Bank led with a $100m commitment, pending the approval of its board. The UN released $10m from its emergency fund and European countries pledged $13.7m. The Caribbean Catastrophe Risk Insurance Facility, a scheme backed by the World Bank, will pay out $8.5m. Inevitably, celebrities joined the effort: Ted Turner and the Angelina Jolie-Brad Pitt foundation were reported to be offering $1m each. 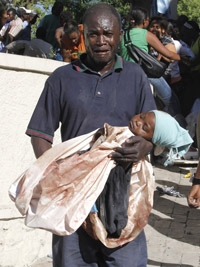 The agony is only beginning

Yet most of this aid will arrive too late for the thousands who remain trapped in rubble or waiting for treatment. Some survivors have been dug out of buildings by hand, but those buried deep within them cannot be freed without heavy equipment. They must receive help within a few days if they are to survive. Even reaching Port-au-Prince is hard. Most of its roads are now blocked and the seaport has been severely damaged. Mercifully the runway of the national airport is still working, but its capacity is limited because the control-tower’s communications equipment has broken down.

Even with all that help, the fear is that there will be many more deaths over the coming weeks. A country that is equipped with only two fire stations will be unable to do anything for itself. The Haitian army was abolished in 1995 in an attempt to get it out of politics. The police force, under the guidance of the UN, is still a work in progress. The quake has degraded an already feeble health service by destroying many hospitals and clinics, including all three aid centres run by Médecins Sans Frontières, an NGO. The lack of medicine and facilities and the scale of the injuries mean that many people will perish from a lack of timely medical care.

Crowded Haiti has long suffered from squabbling and venal politicians, extreme inequality and ecological stress. Under the stewardship of the UN since 2004, the country had made halting progress. Security had improved, and the economy picked up a bit. Bill Clinton, a former American president who is acting as a UN special envoy to the country, led a delegation of private investors there last year. But it is hard to see how the country’s legislative elections due on February 28th, or a presidential poll later in the year, can go ahead. Instead, Haiti will have to start all over again, from even weaker beginnings. Over the coming years it will need a lot of help.