http://haitidreams.wordpress.com
Back in Haiti, everyone. Arrived in Bois D’Avril last night and spent the morning observing classes at the local school. If I’m going to be working in education here, I need to get a better understanding of what’s going on in lots of different locations. All of our other laptop projects outside of Port-au-Prince are in market towns, but Bois D’Avril is a small farming village up in the mountains. I first came here back in the summer to set up the laptops; while I’m here I stay with John and Deb, a Canadian couple who have been here for 33 years and really care about making a small but lasting difference.
The school’s expanded within the last year from around 30 students to around 60. There are four teachers and four classrooms, teaching grades K-5. There’s not enough space in the little yellow school building for everyone, so fourth and fifth graders meet in the downstairs area of John and Deb’s home. That’s also where our laptop project is housed.
Class starts at 8 in the morning, stop for a snack / recess break at 10:30, and resumes around 11. On Fridays they go until 12 only; the rest of the week they go until 2. The kids just got down with the state exams, and this coming Monday will be their last day before winter vacation.
1st Grade
I started the morning in the first-grade class. Christelle, the school’s director, sat in a tiny room (about the size of a walk-in closet) crammed with 8 kids, desks, and a chalkboard. In Haiti, students normally sit in rows on benches with sloped writing surfaces. This room had some of those, but there was also a round table, probably donated. 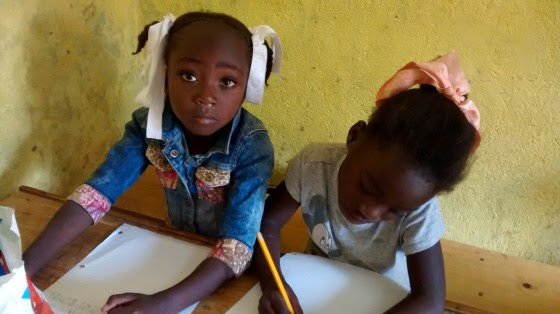 Christelle opened the lesson by introducing me and encouraging the kids to ask me questions. I ended up answering and asking “What is your name?” eight different times. Christelle asked the kids if they had used the computers and used the fact that the computers have a turtle to transition to a silly rhyme about a turtle from the textbook. The kids had heard it before and tried to recite it, but it was nonsensical and in French, so I doubt they knew what they were saying. Then, Christelle started language class. I’m pretty sure the book was intended for French practice because the chapter title was in French, but Christelle did all the discussion in Creole. She asked the kids what they saw in the pictures and pointed out the different pieces of the car like the tire and the engine, as well as tools like wrenches. The kids seemed to know more or less what was going on, and contributed when they could. Christelle emphasized throughout that going to school and studying hard is important: “if you study hard, you can get a car like this someday? And what if your car breaks? If you study hard, you’ll have money to pay the mechanic.” After that, the children pulled out their own books and opened to a page about the letter ‘S.’ Christelle told them that ‘S’ is the first letter in “silans”; one girl muttered “segond” and Christelle congratulated her for making the connection. Then, the kids read some syllables to review other letter sounds – just random combinations of vowels and consonants that they recited line by line in unison. Most of them seemed to know what they were doing – every so often, one would mess up and go to the next column instead of the next row, and they’d still get it right. Christelle had to break the rhythm several times in order to remind them that the accented e sound is shorter than the regular e sound. 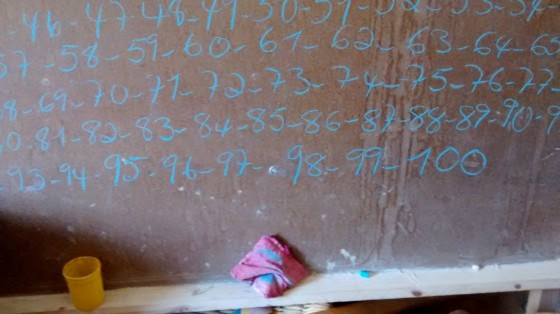