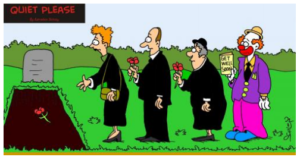 After weeks of planning and several hundreds of thousand American dollars the long-carefully planned protest marches for November 29 were a true embarrassment to Jean-Bertrand Aristide, the entire Lavalas movement, Mirlande Manigat and the rest of the team including Michel Andre, Belizaire, Jean-Charles Newton St. Juste and a team of hundreds …. They could manage a protest that equaled the number of planners…. None of which marched in the demonstration.

Fewer than two dozen marched before the American embassy and fewer than a dozen – some report 6 – attended the Argentinian School project.

Some of our friends, who remained staunch, blindly loyal supporters of Aristide, were devastated by to today’s failure.

The one supporter, who has remained faithfully dishonest to his trade, as a journalist, was Evans Sanon who reported thousands where a dozen or less marched.

Associated Press has never had much of an integrity record in Haiti – since the days of Michael Norton, married to Aristide supporter Toto Bissainthe. Norton took thousands, from Aristide, to file false reports during the embargo period 1991-1994 and after.

And now Associated Press reports thousand where few marched. Where is the truth in journalism?? You won’t find it with AP.

One group was protesting what its members saw as political interference by the U.S. and carried a banner that asked President Barack Obama to stop supporting Haitian President Michel Martelly.

That protest reached a peak of a few thousand people but shrank to about 1,000 as it approached the U.S. Embassy.

Riot police blocked the area with barricades. Protesters responded by taking a back route to reach the embassy compound where they met police with tear gas. The demonstrators set fire to discarded tires and broke the windows of homes and cars with rocks.

A second group of about 600 people led by opposition leader Maryse Narcisse placed a flower Friday morning in a school yard to mark the anniversary of an election day massacre 26 years ago.

Some of the protesters displayed banners supporting former President Jean Bertrand Aristide and his Lavalas Family party, which Narcisse leads.

Haiti has seen a spike in protests in recent months, with a few of them turning violent.

Demonstrators have objected to the rising cost of living, government waste and corruption, and the long delay of legislative and local elections.

There are laws under the Haitian Penal Code that could be used against Evens Sanon and Associated Press. They should be Persona Non Grata and tossed out of Haiti.

Now that the street demonstrations have failed, Aristide and his team will resort to assassination. All they need is one or two Amaral Duclonas to bring terror to the community. If Martelly and Americans do not neutralize the Aristide/Lavalas/Dominican sponsored effort to overthrow the Martelly government our future will be a bad one.