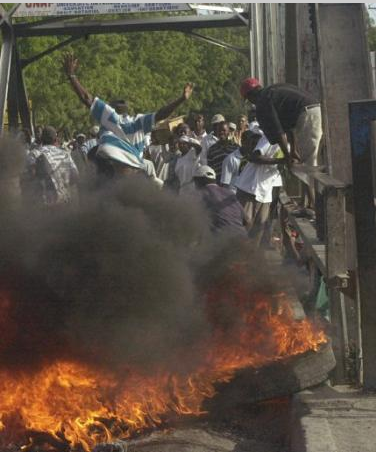 Demonstration was supposed to start at 10:00 A.M. but argument over distribution of 100,000 Haitian $ ensued, delaying launch. Argument in Fort Toroun over money delayed things, but the march has now moved off with about 400 people in initial mob

Needless to say, as usual, the $$ go into a few pockets and are never seen by the mob.

There are no spontaneous demonstrations in Haiti. The size of the crowd reflects the budget. However, the recent demonstrations have showed that people are not interested in actually marching. They take the $$ and stay at home.

It is hoped that many more will join as the crowd moves up Delmas towards Petion-Ville. Petion-Ville already feeling the tension and people are hurrying home, to avoid the violence that is expected.

This march is not a political expression of philosophy. This, like following demonstrations, will be aimed at violence and destruction.

People have been given the go ahead to pillage and steal.

At some point a few people will be killed.

The MINUSTAH troops will become involved, creating a dynamic that will justify the UN occupation for another few years. After all, Haiti is a cash cow for the UN with its $1,000,000,000 budget.

Michel Martelly really let us down when he betrayed Laurent Lamothe to protect his wife Sophia and her brother Kiko.

Martelly could still save the day since he has overwhelming support among Haiti’s young people. If he made an appeal now, explaining the danger, the Lavalas/Aristide people would be eliminated from the game.