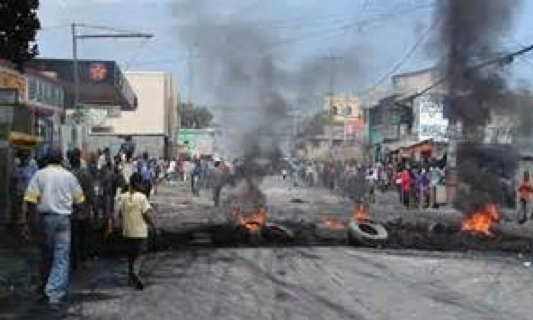 Yesterday, our police chief made a statement that was really too little too late. He said the PNH would guarantee the streets so people could travel, businesses could function.

Didn’t work. Streets are closed – too dangerous for even the bravest person to travel.

The Police Chief should have taken action a week ago, when Aristide/Lavalas activists took credit for what was going to happen. Now we have seen people Necklaced, private cars stoned, businesses sacked, people threatened if they attempt to use the streets.

A few people have destroyed our situation. Taxi drivers want to work, but will be beaten if they drive on the streets. A few burned taxis, tap-taps – and everyone stays home.

Evens Paul, as Prime Minister, chosen because he was thought to have some control of the streets, now oversees the worst violence since before Aristide’s departure in 2004. He is a totally useless individual, capable of terrosism, but incapable of stopping others involved in terrorism.

MINUSTAH is invisible. If they cannot assist, throw them out – IMMEDIATELY!!!

We have just called for an ambulance; They are closed and have been closed since Friday.

Look at the following video and see whether or not you agree that Aristide should pay for his terrorism – once and for all.

The American government has enough sealed dossiers regarding Aristide’s cocaine business, to jail him for life, but they refuse to act.

The U.S, Embassy has received reports that there are roadblocks and burning tires at the following locations:

Rte National 1 near Ministry of Agriculture

Also: All – due to the large number of incidents of unrest in town, all personnel should shelter in place at your current location. If you are at the Embassy, stay at the Embassy.

If you are at home, stay at home.

If you are at a meeting, stay where you are.

Will update when possible