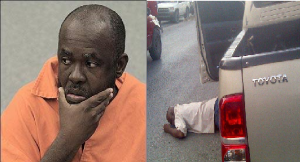 Oriel Jean — the former security chief of ex-President Jean-Bertrand Aristide and whose testimony in U.S. courts a decade ago helped take down key figures in Haiti’s drug trafficking underworld — was shot to death Monday in Port-au-Prince.

Haiti National Police Spokesman Gary Desrosiers confirmed Jean’s murder between the Delmas 29 and 30 neighborhoods not far from the international airport. Desrosiers said he was shot twice by three men on a motorcycle. News of Jean’s death and photos of his bullet-riddled body lying face down in a pool of blood on the street quickly spread through social media.

A friend of Jean’s who declined to be named for fear of reprisals told the Miami Herald that Jean was riding with a Dominican co-worker when the vehicle was struck from behind by a motorcycle. Jean was gunned down after he stepped out of the vehicle to check the damage.

“Nothing happened to the Dominican guy. [Jean] was the main target,” the friend said.

In 2005, Jean was sentenced to three years in prison in a money-laundering plea deal after helping the U.S. Attorney’s Office convict several Haitians and Colombians of moving tons of Colombian cocaine through Haiti to the United States. Among those convicted were Haitian former top police officers — some of whom are back in Haiti after serving their sentences — and a powerful drug kingpin, Serge Edouard.

Edouard received a life sentence after Jean testified that the drug trafficker gave him and other law-enforcement officials hundreds of thousands of dollars to protect his cocaine shipments to the United States.

At Jean’s November 2005 sentencing, U.S. District Judge Jose Martinez complimented him for his “good work.” In his court testimony, Jean indirectly implicated Aristide and also testified against him before the grand jury. Aristide was never charged and the statue of limitations ran out before U.S. law-enforcement officials could prove that he collected kickbacks from traffickers.

After his release from prison in September 2006, Jean was given a special visa that allowed him to legally live and work in the United States. After running into President Michel Martelly while he was campaigning, Jean decided to move back to Haiti where he had hoped to get a job in the administration, his friend said.

He quit his job as a parking-lot attendant at Fort Lauderdale-Hollywood International Airport, leaving his wife and kids in South Florida. The friend said he was working as an administrator for a Dominican construction firm in Port-au-Prince.

Lately, Jean was back in the news in Haiti, where he was talking again. He was a key witness in the ongoing investigation in the assassination of journalist and Aristide critic Jean Léopold Dominique.

Jean’s death came one month and a day before the 15th anniversary of Dominique’s April 3, 2000 assassination.