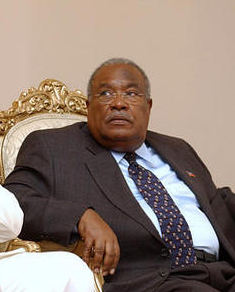 Haiti Libre:Thursday at a reception held in his honor at the residence of the Ambassador of Chile in Washington, Gérard Latortue, the former acting Prime Minister (February 2004 to June 2006) installed after the exile of President Jean-Bertrand Aristide, received by presidential decree of Ms. Michelle Bachelet, the official distinction “Orden al merito de Chile”.

This award was presented to him by the Chilean Gabriel Valdes, Chile’s Ambassador to the United States and former head of the Minustah (August 2004 to May 2006), for having successfully completed, alongside the President Boniface Alexandre, a transition in Peace, which helped to achieve free, inclusive, transparent elections in February 2006.

COMMENT: HAITIAN-TRUTH.ORG
The past pops up to haunt us.
Following Aristide’s removal, in 2004, the Constitution required elections, within 45 – 90 days after Aristide’s resignation. Of course, we didn’t do that. To have done so would have seen the most popular person in Haiti elected – Guy Philippe.

So Haiti came up with another of those convoluted solutions involving “7 Sages.” And three candidates Smarck Michel, Herard Abraham and Gerard Latortue. If these three represented Haiti best choices, it shows we were in real trouble. Herard Abraham stole millions. Smark Michel is an incompeten who was Aristide’s lover/Prime Minister.

Then the “7 Sages” started to vote, and vote, and vote some more.  None of their ballots selected a winner. And so, it was suggested that they select the guy with the most Number 2 ballots.  Gerard Latortue was no one first choice but he got more second. The result saw Gerard Latortue put in place as Prime Minister.

This set the ground work for major corruption as Latortue, and his friends, bled the treasury. Latortue is said to have made over $11,000,000 on one project.  Someone took 1 armoured SUVs from the Prime Minister’s inventor. Youri Latortue, Gerard’s nephew, made a fortune. All of this would have been acceptable had he actually overseen a real and honest election. Instead, Latortue was pressured into accepting a MINUSTAH crime tha saw Rene Preval installed as President in what was a completely and totally flawed electoral process Preval was not – in spit of retrospective reports to the contrary – the leading candidate, in the vote count. The deciding event was when Rene Momplaisir, the Lavalas popula organization leader, put 900 people into the Montana Hotel where they ran up and down the corridors, and jumped into the swimming pool. MINUSTAH stood by – petrified, even though the Montana was home to MINUSTAH leadership.

Momplaisir’s message was very simple: Preval is president, or I will burn Port-au-Prince to the ground. The vote was then rigged to give Preval 51.4 percent, avoiding a run-off that he would have lost.

And Haiti suffered a Preval Presidency that saw corruption accelerate, school drop off, drug traffic increase and kidnapping become a political weapon. Many people los their lives to Preval violence. People like Amarol Duclona carried out hits on the orders of Preval, and his associate Jude Celestin. Duclona has admitted to all of this and now resides in a Franch prison f his Preval/Aristide ordered murder of a French Consul.

And Gerad Latortue is given an award for this!!!

Heaven protect Haiti from its friends!!!