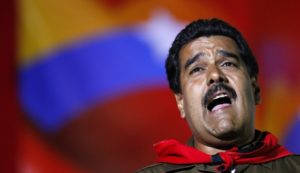 Here are some of the questions that Maduro, who was proclaimed president-elect in an “express” ceremony less than 24 hours after the election, has not yet answered:
•  If Maduro is so sure that he won by 51.6 to 49 percent of the vote, as the supposedly neutral National Electoral Council (CNE) announced at the closing of the polls, why doesn’t he accept the recount demanded by opposition leader Henrique Capriles, as Maduro himself had vowed to do in his election night victory speech?
•  If the election results were crystal clear, why did the CNE hold a snap proclamation ceremony to install Maduro the day after the election, instead of waiting until the previously planned proclamation day on Thursday?
•  If CNE head Tibisay Lucena was a non-partisan umpire of the election process, as she claimed, why did she make a political speech during Maduro’s ceremony on Monday accusing the United States and the Organization of American states of “foreign intervention” and “meddling with [our] national sovereignty”?
•  If Capriles’ assertion that there were more than 3,200 documented cases of voting violations on Election Day — including pictures of people whispering into voters’ ears as they voted — is not true, why didn’t Maduro accept an investigation by neutral international observers into these allegations?
•  If Capriles’ claims that Venezuela’s armed forces intimidated voters are false, why wasn’t Defense Minister Diego Molero fired after he stated publicly on March 7 that Venezuela’s Bolivarian armed forces “are revolutionary, anti-imperialist, socialist and chavistas”?
• If Maduro is a democrat, why did he prohibit the opposition’s legitimate right to have a peaceful demonstration on Wednesday? Why is the government now threatening to arrest Capriles and other opposition leaders? And why did Maduro demand on Tuesday that Venevision and Televen, among the last remaining non-government-run television networks, should “define which side they are on”?
•  If the electoral process was fair, why didn’t Maduro allow international election observers from the European Union and the Organization of American States, which monitor the entire election process over several months, including equal access to television time? Why did Maduro only allow electoral visitors from friendly countries to “accompany” the voting on Election Day?
•  If Venezuela held a free and fair election, why was the opposition candidate only allowed four minutes a day of paid television advertising , while Maduro enjoyed 14 minutes, plus hours of free nationally broadcast presidential speeches?
Maduro and Lucena, defending the official results, have argued that their critics in the international community are unfair, because they didn’t object when Mexican President Felipe Calderón won the 2006 Mexican election with 0.5 percent of the vote, or when George W. Bush won the 2000 election by a razor-thin margin of electoral college votes.
But their arguments are misleading, because Mexico allowed a recount of 11,839 ballot boxes whose results were disputed by opposition leader Andres Manuel Lopez Obrador, and Calderón was officially proclaimed the winner once the recount was over about two months after the election — not the day after.
In addition, Calderón had allowed international observers from the European Union and other election monitoring groups to come to Mexico, which looked into the claims of fraud and concluded that Calderón had indeed won the election.
The comparison with Bush’s election is equally misleading, because it was subjected to a recount of disputed ballots in Florida that took about a month, and was subsequently accepted by opposition candidate Al Gore.
“We are in the final phase of a civilian-military coup,” opposition politician Diego Arria told me on Wednesday. “They know that they stole this election, and that they can’t afford going to a recount.”
My opinion: Maduro may or may not have won the election, but his refusal to allow a total recount of the vote casts a big shadow over his legitimacy.
He not only proved to be a wooden candidate who nearly lost — or lost — an election despite near total control of the media and massive state resources in his favor, but has raised even greater questions by holding an “express” installation ceremony, and by clamping down on the opposition’s right to peacefully demand a vote recount.