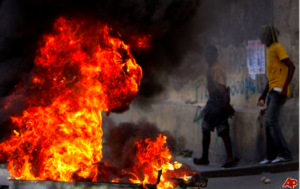 A small opposition sponsored crowd coordinated by Gerard Giles took to the streets to voice opposition to the government. Lavalas, MOPOD, UNIPOD, BIPOD, TRIPOD  and the others didn’t add up to much. A small turn out when Dr. Narcisse, Aristide’s chosen Lavalas candidate, said they had spent $1,000,000 on this last-stand action.
A large lump of this money was spent on media coverage as some reporters claimed 10,000 demonstrators.
The Canadian and American embassies, along with others, had observers on site.
It is 5:30 PM and Martelly is slated to give his pronouncement at 6:00 PM.
What will he do?
A vote for Democracy, or a Narco State???