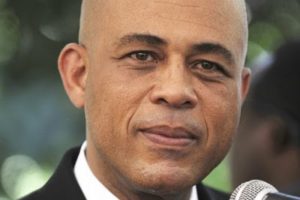 This two-story school building on a mountaintop is located in the rural village of Source Carossole. It is just outside the city of Leogane, the epicenter of the Jan. 12, 2010 earthquake. The school took 15 years and $500,000 in recycled bottles to built. It’s the dream of Fernande Valme, a mother who could neither read nor write. Today L’Institute Mixte Suze Valme Coeur is rubble., But the Valme siblings who dream of rebuilding the school along with a hospital and clinic are realizing like so many other community organizations they have no access to more than $5 billion in promised foreign reconstruction aid for Haiti. The school provides free education to 460 students and is the only school for miles in the rural town.

The final legal hurdle to the presidency for Haiti’s president-elect was removed Thursday when rival and former first lady Mirlande Manigat said she will not mount a legal challenge.

Manigat announced her decision in a statement just as Michel Martelly was flying to Miami for an overnight trip. On Friday, he was scheduled to meet in Haiti with former President Bill Clinton, who arrived there late Thursday to co-chair the quake-battered nation’s recovery commission.

“She made the right decision not to contest,” said Martelly, who added that Haitians indicated they wanted change when they voted for him. He won the March 20 runoff by a 2-1 margin.

Manigat said through her attorneys she will not legally challenge the election results because she has no faith in the process. But she added that she remained dissatisfied with how the election was staged. Almost 30 percent of the votes were tossed out for fraud and other reasons, according to officials.

Her attorneys also accused Martelly of breaking elections law on the day the first round results were announced when he, along with presidential candidate Charles Henri-Baker and hip-hop star Wyclef Jean, took to the streets in carnival-like fashion to protest the election. Former presidential candidate Jude Célestin had asked the elections council to issue sanctions against Martelly and Henri-Baker, but none was administered.

In a visit to The Miami Herald, Martelly said he plans to focus on the country’s reconstruction and building up the island-nation’s economy after his inauguration next month. He said the victory puts him in position to “do more for the Haitian people.”

Members of Martelly’s transition team have attended meetings of the reconstruction commission to educate themselves on the recovery efforts, which have been criticized for being too slow.

As president, Martelly will inherit the mammoth task of guiding Haiti’s post-quake reconstruction, while figuring out where to find the money to make good on lofty campaign promises, including free access to education for all.

One of his decisions will be to determine whether to reprioritize several of the reconstruction projects, which are dependent on $11 billion in promised donor aid.

One of Martelly’s immediate challenges is putting together a government that will get the confidence of the international community. Until now, donors have been holding onto tens of millions of dollars in budget support to Haiti saying it’s waiting for the new government to come into office.

Haitians have said that Martelly’s government should build on work that has been done instead of starting from scratch. During his interview with The Herald, he indicated that he will be seeking continuity in some areas.

On job creation, Martelly said he will bolster the agriculture sector and focus on peasants because “they have been left out.” He also said with Haiti still in a reconstruction phase, that jobs will be created through ongoing efforts to rebuild Port-au-Prince and surrounding areas.

As part of his proposed economic recovery, Martelly said he plans to build Haiti’s tourism industry, which he said had been neglected.

There has been much speculation on whether Martelly will keep Prime Minister Jean-Max Bellerive as part of his administration.

Martelly said while Bellerive is a “talented politician” he would not speculate on who he will appoint as prime minister.

“It’s not about whose going to be prime minister,” he said. “It’s about how we’re going to change the lives of the Haitian people.”

During his campaign, two former presidents who were in exile Jean-Claude Duvalier and Jean-Bertrand Aristide returned to Haiti, with Aristide landing on the eve of the election.

Martelly said he expects both men will play a role in the country, but not necessarily as a part of his administration.

When asked if he would work with Duvalier, he said “”I don’t prioritize ideology, I prioritize competence.”

As an artist, Martelly acknowledged he was critical of Aristide, but added “As much as I welcome Duvalier, I welcome Aristide.”

Now, with his focus on building a transition team, Martelly said among his priorities will be to address the decentralization of the capital. He said Haiti will make progress when the provinces have government satellite offices that don’t require Haitians to travel to Port-au-Prince official business.

“Many Haitians died in the earthquake because they couldn’t get IDs and licenses,” he said. “It’s time we stop thinking of Haiti as Port-au-Prince alone.’’