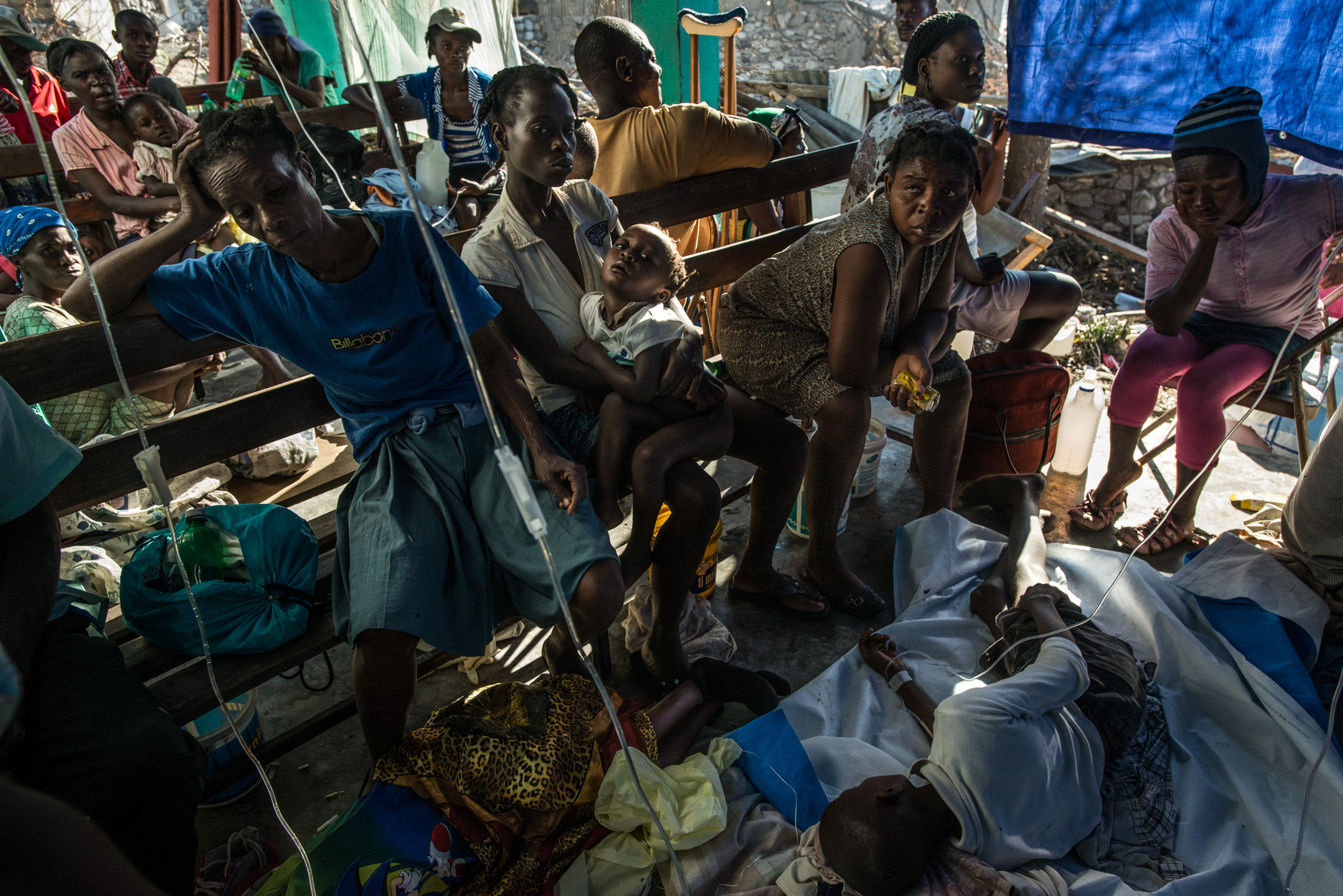 The small clinic in Rendel, Haiti, is overflowing with Cholera patients, and more keep coming. Credit Meridith Kohut for The New York Times

The locals said it would take two to three hours on foot to reach Rendel, a remote town in Haiti’s southern peninsula suffering from a biblical outbreak of cholera.

For days, we’d been asking about the journey, quietly hoping the locals were wrong, that there was a passable road we could take by four-by-four, or at the very least a motorcycle.

As it turned out, the only thing the locals were wrong about was the duration of the trip. It was much longer than three hours — at least it was for me, the photographer, Meridith Kohut, and our fixer, Andre Paultre.

For us the journey took closer to five hours, during which we were passed by old men walking barefoot and old women carting luggage on their heads. Little kids raced ahead to play in the river, swept past us in the current, then raced back ahead of us. It was humbling.

To reach Rendel, we left on foot from the wrecked town of Port-a-Pimant, which is bordered by a murky river that curves through a stone basin before it feeds into the ocean.

The very first step is to wade through this dingy river, which whistles past with considerable force, carrying a stew of bacteria and waste I tried not to think about.

Still, we thought it was a good idea to remove our shoes. No sense in hiking for hours with wet feet, right?

No. Not right. Aside from almost being swept away because of poor footing, there would be another eight river crossings. By the end, we stopped bothering to even empty our shoes of the rocks the river deposited in them.

For much of the journey a group of friendly travelers accompanied us. Some were living in Rendel, while others had family there and wanted to check on them. Without even basic cell service in the area, seeing loved ones required a hefty hike.

One man had come from Port-au-Prince to see his brother and their family home. Having quickly grown tired of wading into the water with his nice clothes and shoes, he stripped down to his briefs and carried his belongings in a bundle under his arms.

We started calling him Mr. Underwear. Mr. Underwear would race ahead of us every so often, but around the bend we always found him patiently waiting for us to catch up. He walked that way until we crossed the river for the ninth and final time.

The destruction along the route was disheartening; it seemed to grow worse the deeper into the valley we wandered. And it wasn’t simply that we were all thirsty and tired and a bit sun battered: The desperation of the villages along the way steadily escalated. 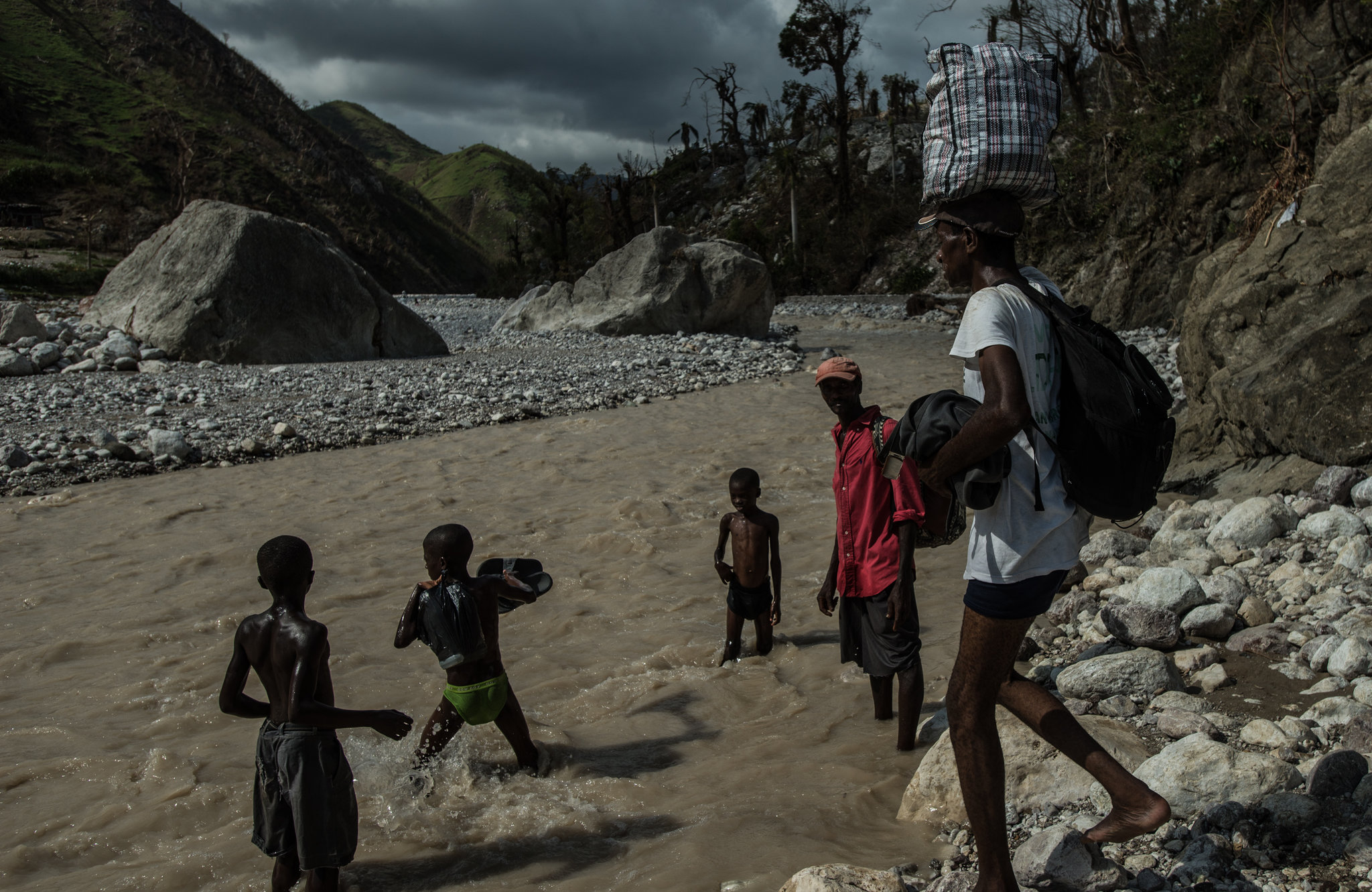 Families trudge through a river crossing on their way to Rendel. Credit Meridith Kohut for The New York Times

All the same, the river meandered through a giant valley floor of polished river stone. The landscape on either side varied between moss-green mountains and plateaus, where communities had settled.

A tree the size of a small office tower was stretched out on the bank of the river, its trunk split in the center and roots upturned in a giant, hairy tangle. Women washed clothes along the water’s edge as long trains of family members passed in single file, fleeing for the cities.

By the time we reached the town, situated on a rise by the river, the sun was setting. We didn’t know where we would be sleeping, and our water supplies were almost half depleted. Just about the only visible life in town emanated from the cholera clinic, a dilapidated building stripped of its roof and swollen with patients.

Medical staff frantically stepped around the prostrate bodies and limbs on the floor. We did the same, spending two hours interviewing the few nurses there and the patients they were tending to, until the darkness inhibited us.

That night the Catholic priest gave us permission to sleep in the rectory. By some miracle, they had a generator and a few mattresses for us. We stripped our wet shoes and left them by the door, after hosing them down with chlorine to kill the germs.

We ate the peanut butter and jelly sandwiches we’d packed, and shared a bottle of Gatorade we’d brought with us. I’m not sure when we went to sleep, but we woke by six the next morning.

The clinic was more frenetic as the day’s new patients appeared. Meridith continued shooting while I checked in with patients I’d met the day before. By noon, we decided to head back.

We were running low on water. We didn’t have enough to replenish what we were losing in the heat, which was fierce and punishing.

One of our guides, an old man who never once asked us for anything (not even whether we wanted a guide), showed us to a fresh spring by the river. Fortunately, Meridith brought a hand-held filtration device, and we filled a few bottles at a spring along the way.

Drinking water downstream from a cholera outbreak seemed like a bad idea.

But, without any choice, we did it anyway.