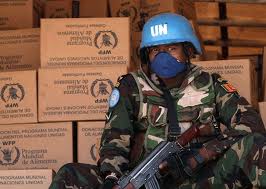 OUANAMINTHE, Haiti — After hopping off a helicopter, she makes her first stop at a container-built office complex where she greets workers, flowing easily between French and Spanish. Inside a hospital courtyard a few hours later, she switches to flawless Creole.

It’s a question many are asking in this northeast Haiti border town, and elsewhere as Sandra Honoré begins the arduous task of improving a battered United Nations relationship with Haiti and preventing the country from slipping deeper into political chaos. The Trinidad-born negotiator, who was appointed in May as the first woman to head U.N. peacekeeping operations here, has unusual linguistic skills — and is an enigma.

Reserved and controlled, Honoré is making an impression not by what she’s saying — but by what she isn’t.

More listening may just be what Haiti needs, say foreign and Haitian observers who are increasingly worried about the country’s deepening political uncertainty. Disagreements between opposition leaders and President Michel Martelly over long-overdue legislative and local elections are at a fever pitch.

Rhetoric against foreign influence also is growing. And some U.N. contributing nations, increasingly impatient with Haiti’s politicians, are joining the call by Haiti’s Senate and others for early withdrawal of the 8,793-member blue-helmet peacekeeping mission.

After nearly 10 years in Haiti, the U.N. is facing sharper criticism not only because of Haiti’s slow progress building institutional and political stability, but also due to a string of sex scandals involving peacekeepers and increasing evidence that U.N. peacekeepers were responsible for sparking a deadly cholera epidemic after Haiti’s Jan. 12, 2010 earthquake.

“I’ve been told that I arrived in Haiti at an interesting moment. And I keep saying, ‘All moments in Haiti are interesting,’ ” Honoré said. “Is it the best time to be in the mission, or to be heading the mission? I think the results will have to speak to that.”

As U.N. Secretary General Ban Ki-moon’s special representative, it will be up to Honoré to guide the U.N. Security Council on decisions about MINUSTAH’s eventual departure. She also must help determine the scope of a down-sized mission, focused on police and judicial reform, by 2016. Ban is recommending that Haiti’s U.N. troops be reduced by 15 percent. A working group in Haiti, made up of U.N. personnel and Haitian officials, already has been set up to look at the future of the mission.

Honoré is scheduled to brief the council on Aug. 28. In March, the council warned Haiti it risks losing international support if long overdue elections for one-third of the 30-member Senate and more than 4,000 local posts were not held by December.

What the council does next will be taken up in the coming weeks, ahead of the opening of the U.N. General Assembly in September. The deadline for a decision on the renewal of MINUSTAH’s mandate is Oct. 15.

“One positive element in all of the meetings I have had so far is I have heard from all of the players across the divide — a willingness to dialogue; that I think is positive,” Honoré said in an interview with the Miami Herald. It was her first with the international press since her arrival.

Educated in Guadeloupe and France, Honoré is part of a disappearing generation of well-trained career Caribbean diplomats. And she approaches her politics like her fashion: simple but chic, observant but understated. A wife and mother of a 20-year-old son, she is known as a formidable interlocutor with the ability to shut down anyone with her well-researched positions or with a simple question.

Last week, when the immigration director in Ouanaminthe said his job was to facilitate the movement of Haitians across the contentious Haiti-Dominican Republic border, Honoré offered up a quizzical look.

“Only Haitians?” she asked before he quickly corrected his statement to also include other travelers.

“She’s a student of Haitian history with a deep knowledge of her brief; a savvy negotiator with the confidence of Washington insiders,” said Lionel Delatour, a Haitian political analyst who has known Honoré for years.

Honoré’s relationship with Haiti dates back 40 years. As a college student in Guadeloupe, she visited for 2 1/2 weeks.

“I remember mais moulin, dous, and akasan from Petit Goâve,” she said with a smile, citing the popular provincial Haitian dishes.

Another fond recollection is former Haitian President Leslie Manigat. He was her professor at the University of the West Indies’ Institute of International Relations in Trinidad.

In the early 2000s, Haiti would once more call. This time, she worked as a key behind-the-scenes player, serving five years as chief of staff for Organization of American States Assistant Secretary General Luigi Einaudi. It was the OAS’ failure to stave off Haiti’s 2004 political crisis that eventually forced the ouster of then-President Jean-Bertrand Aristide, and led to the U.N.’s stay.

Ban’s appointment of Honoré surprised many, including Martelly, who had initially opposed the decision but later changed his mind. Sources say her nomination came from within the U.N.

But some wonder if a low-key female diplomat can be politically shrewd in a country like Haiti, where politicians often espouse a paternalistic attitude toward women and individuals of Caribbean descent, and where flaming barricades erupted this week as Martelly vacationed in South Florida.

“It would be a mistake if Haitian political actors were to be dismissive of her leadership,” Delatour said.

Honoré says she hopes 34 years of diplomatic experience speak for themselves. Still, she doesn’t dismiss the significance of her appointment after a string of mostly Latin men.

Last week, during a seven-hour tour of Haiti’s northeast — her first major planned public outing — she received a warm reception in sharp contrast to anti-U.N. protests in the capital.

“We work in the interests of the Haitian people,” she said at U.N. regional offices in Fort Liberté where she took studious notes as staffers spoke about efforts to curb child trafficking, domestic violence and professionalize the police.

But it was her ability to flow from English, French, Spanish and Haitian-Creole that won over appreciative crowds.

While her linguistic abilities — she also speaks Portuguese — typify the global nature of her work, they are also part of the nuanced power of this five-foot-three inch woman whose presence could easily be overlooked.

“I have to communicate with people, and I have to do it in a way that they don’t ask me ‘What are you really saying when you try to speak Creole?’ ” she said with a chuckle.

Honoré’s understanding of not just the language of Haitians, but also its cultural nuances is important, observers say. It can help transmit the right message and communicate national sentiments in a nation where foreign diplomats are often seen as bullies or cheerleaders.

Still, not everyone is convinced that changing the face of the mission will soften criticism of the U.N.Critics note that despite more than 8,000 cholera deaths, the U.N. still refuses to take responsibility for its role in the cholera outbreak.

“We’ve haven’t progressed while this force has been here,” said Eric Jean-Baptiste, a wealthy lottery owner who recently unveiled a statue of a Haitian stepping on a blue helmet, the latest entry in his anti-MINUSTAH campaign.

“She will continue to perpetuate the same narrative,” he said of Honoré, who is black. “During slavery, the commanders were not white. They were black. She came to continue to play the same role.”

The challenges facing the U.N. mission, much less Haiti, could easily put off the most seasoned of diplomats. But Honoré is embracing it with a quiet focus.

As she wrapped up her tour last week, Honoré stopped at a garment factory employing thousands of women. There she chatted with Therese Jean-Charles and left a lasting impression. “As a woman,’’ the $5 per day sewer said, “I feel proud to see a woman in charge.”