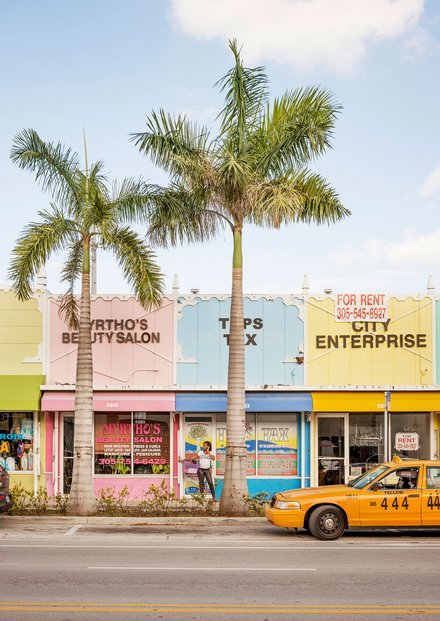 Little Haiti, adjacent to the major Wynwood Art District, is being called Miami’s next big art and cultural center. Also referred to as Lemon City, the area was originally an old farming community in the late 1800s and early 1900s and is now predominantly made up of Haitian immigrants. Though Little Haiti struggled economically and had a high crime rate in the 1980s and ’90s, it is today going through something of a Renaissance period, with developers looking at properties there for new hotels and restaurants, and big-name galleries like Emerson Dorsch, Gallery Diet, and Pan American Art Projects moving into its old industrial spaces.

It might be another year before the gentrification is truly visible, but this year’s Art Basel brings well-deserved attention to this humble and beautiful little corner of the Magic City through the area’s newly opened galleries and dealers. Strolling through the streets, one will also find colorful wall murals painted by local artist Serge Toussaint, voodoo shops, and traditional Haitian bakeries and restaurants. For an escape from the Art Basel brouhaha, here are five Little Haiti spots to visit before the neighborhood, like the fair itself once did, goes big:

One of the most popular Haitian-American eateries in the area, this family-owned restaurant serves traditional dishes like griot (fried pork), poulet (stewed chicken with rice and peas), and legume (braised vegetables). Leela, the owner and restaurant’s namesake, is also the cook and sometimes hostess in this small establishment, which is set in the middle of a shopping center and feels more like a local home than a formal restaurant.

Yeelen Gallery is an art transplant that has been in Little Haiti now for two years. The themes of the artwork housed in the 13,000-square-foot space are based mainly on contemporary urban culture. The owner and director of the gallery is Karla Ferguson, and her husband, artist Jerome Soimaud, has been painting the local residents of Little Haiti, and its culture, for years.

Perhaps more hipster than Little Haiti, this local vinyl shop has become something of an institution for music nerds in the surrounding neighborhoods. It serves coffee, tea, and vegan treats, and sells indie magazines and poetry journals. Sweat is located next door to Churchill’s Pub, an equally out-of-place but intriguing English bar and punk-rock club with a bit of a cult following.

For a true immersion into the local Haitian-American traditions of the area, the cultural center is the place to visit. It houses an art gallery and theater and plays host to Afro-Caribbean celebrations and performances. Every weekend the center puts on a Caribbean marketplace, where visitors can hear jazz, buy art, and eat delicious Creole brunches.