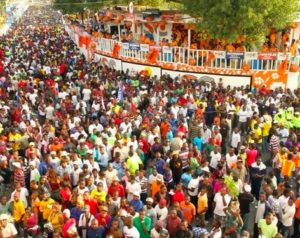 Noon passed, and crowds started to gather in front
of Haiti’s National Palace as the Martelly/Lamothe government prepared to celebrate its third anniversary.

(Actually Lamothe’s second, a record in itself.) By midnight the area contained more than 300,000 as the crowd spilled over into surrounding streets.

As various musical groups presented their acts, to entertain the gathering crowd, the impetuous President could not resist joining in, grabbing a microphone and gyrating to the beat.

Even as the event accelerated, Aristide agitators endeavored to spoil the mood, setting an are service station on fire, but this had no effect.

The crowd was enthusiastically with President Martelly but, like a party-goer, with a hangover, Martelly and Lamothe will face a growing surge of dissatisfaction with regard to the school and promised education, for Haiti’s kids. The focus of the opposition elements is the PSUGO sector.

Time for a reassessment of the overall Martelly promise and the results.

Education will make or break this government. It is more important than the proposed elections. Handle the education properly and Haiti’s majority will forgive the government for delayed elections.

President Martelly has the desire to deliver, on his promise of a good, free education. We must all work to make sure this becomes a reality.