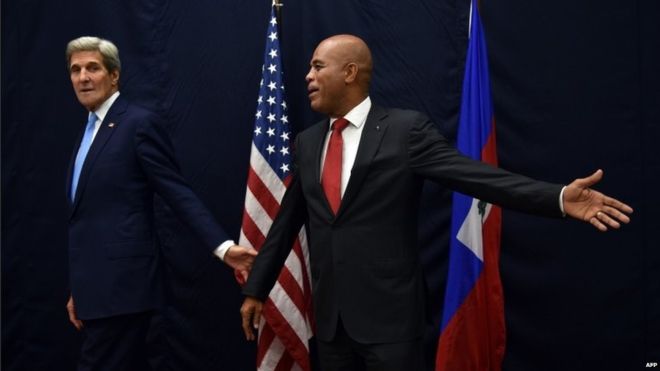 PORT-AU-PRINCE, Haiti (sentinel.ht) – Alongside Secretary of State John Kerry in Port-au-Prince on Tuesday, Haitian President Michel Martelly, who sits head of a totalitarian government, said he would leave office on February 7, 2016.

Martelly spoke during a press conference following meetings between members of his regime, the top U.S. diplomat, Kerry, and the entire U.S. delegation in the country. Discussions were held on elections where due to a troubled process, power will not be handed to a democratically elected government.

Out of 70 aspirants for the nation’s highest office, there is not a clear front runner. This places enormous pressure on the Provisional Electoral Council (CEP) to independently administer the most fair and transparent electoral process as possible. That has not happened.

An overwhelming majority of Haitians rejected the first round of legislative elections which took place on August 9, 2015. They have declared the process an “electoral coup d’etat” and many have called for resignations of electoral councilors. Some have already begun calling for and planning for a transitional government.

For more than four years, Martelly, a proponent of Duvalierism, made conditions not conducive to the organization of elections. In the earlier years of his five year term, the aim was to establish a dictatorship. Much recently, plan B, which was to control all state institutions to a degree as to control the electoral process.