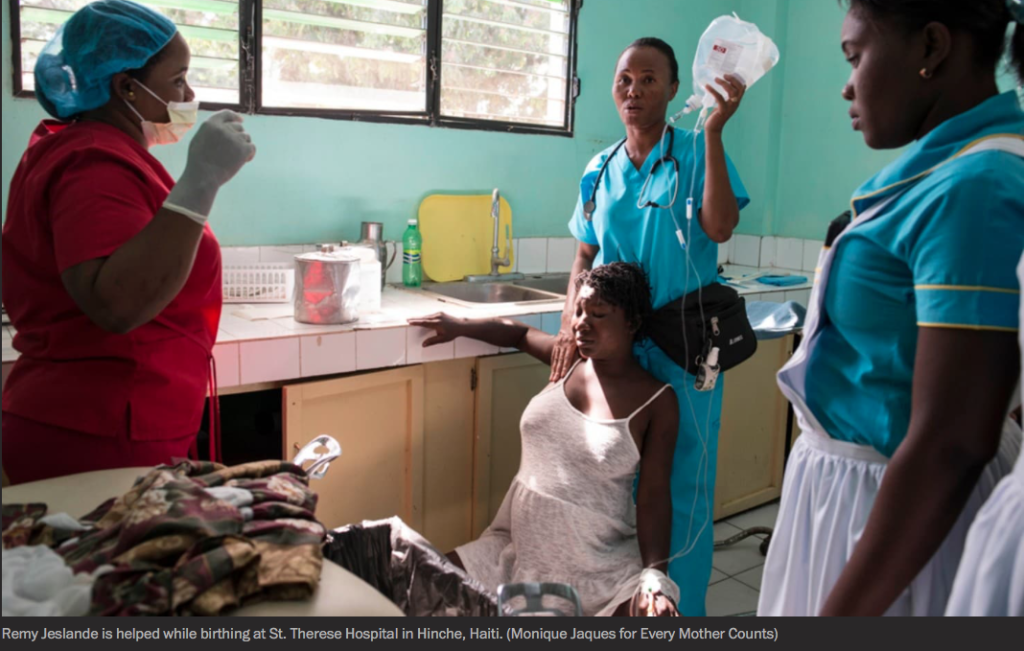 The maternity ward at St. Therese Hospital in Hinche, Haiti, doesn’t have running water. Waste is collected in buckets. When the electricity cuts out, as it does throughout the day, the midwives put on headlamps and keep on delivering babies. Nurses use antibacterial gel sparingly, not knowing when the next shipment will arrive.

The staff is small and overworked. The country has just one midwife for every 50,000 people, according to the United Nations Population Fund. And the lack of resources shows up in the statistics: Haiti has the highest infant mortality rate in the Western Hemisphere.

A newly delivered baby rests with its mother with help from Midwives for Haiti students at St. Therese Hospital. (Monique Jaques for Every Mother Counts)

Regulus was trained through a program operated by Midwives for Haiti. With funding from Every Mother Counts, a New York-based nonprofit founded by Christy Turlington Burns, and other donors, the program is working to change the statistics by training skilled birth attendants. Having skilled care at birth is considered the most important intervention to make childbirth safe.

Only 67 percent of women receive prenatal care, and only 37 percent have a skilled attendant at delivery, according to Countdown to 2030, a global health-care collaboration.

Midwives for Haiti, which has six Haitian teachers and help from visiting volunteers, has trained 124 birth attendants; another 32 students are in a year-long class that will graduate in 2018. Students are taught at St. Therese, as well as at mobile clinics. The mobile clinic visits the remote town of Roy Sec, outside of Belladere, Haiti, for checkups and prenatal visits. (Monique Jaques for Every Mother Counts)

Early one morning, the current class begins the day by singing and praying. Then they settle down to learn about pain management for women in labor.

“Many people are suffering in Cabestor, where I’m from,” says one of the students, Sheila Pasquet.

After completing the program, Pasquet and other midwives will work in places such as Cabestor, a remote community where the maternal mortality ratio is roughly three times the national average and where about 1 in 5 children don’t make it to their fifth birthday. Mortality began to decrease there, Pasquet says, after a birth center was built.

The Cabestor center is run by Eclide Michel, a Midwives for Haiti graduate. She makes daily rounds to mothers who have recently given birth, sometimes walking up to two hours to remote locations.

Before the clinic opened, women seeking a skilled birth attendant would have to walk up to four hours and cross 20 rivers and streams to reach the nearest hospital.

“The terrain is so difficult that the women are carried down to the birth center by stretcher,” Pasquet says.

The students get practical and classroom training, learning how to educate women about pregnancy. Each morning a team piles into a truck that leaves Hinche for rural areas that don’t have medical professionals. They set up folding tables in the village square, where they offer lessons in family planning and suggestions for how pregnant women can monitor their health.

Eventually, they hope, their folding tables will be replaced by new clinics.

A nurse gives a family-planning talk, as well as a primer on recognizing pregnancy distress. (Monique Jaques for Every Mother Counts) The clinic, which is operated by Philoméne Thelemaque and students Gislaine Louis and Estimene Lubin. (Monique Jaques for Every Mother Counts) Michelle and the baby she delivered, Claybe. (Monique Jaques for Every Mother Counts)

Michelle and her co-worker, Junior, visit Marcenat and son, Claybe, at home near the Cabestor Birth Center in Cabestor, Haiti. (Monique Jaques for Every Mother Counts)

Michelle performs a checkup in Marcenat’s home. (Monique Jaques for Every Mother Counts)

About In Sight
In Sight is The Washington Post photography blog for visual narrative. This platform showcases compelling and diverse imagery from staff and freelance photographers, news agencies, and archives. If you are interested in submitting a story to In Sight, please complete this form.