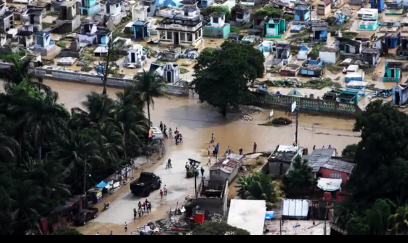 We were recently treated to a preview screening of the film “Kombit” which unpacks the work being done by way of a partnership between the non-profit “Smallholder Farmers Alliance” and the Timberland company in Haiti.

Haiti has a major issue with deforestation with over 98% of the nation stripped of trees as a direct result of the ever growing demand for charcoal which has turned large swaths of the country into desert. To make matters worse, the country has fallen into a drought and was hit with a major earthquake in 2010.

The film “Kombit” documents the work done amidst what seemed a hopeless downward trend for the environment by the Smallholder Farmers Alliance (aka SFA) in partnership with multinational Timberland who catalyzed an effort to rebuild local farming in Haiti from the ground up. The SFA was created out of the unlikely partnership between Haitian Timote Georges and Canadian Hugh Locke who discovered a shared passion for the revitalization of Haitian farming through education and community.

Timberland was an early partner and was looking for a local group to lead an effort to plant 5 million trees in Haiti in support of a commitment Timberland had made to the Clinton Foundation. Timberland Director of Strategic Partnerships Margaret Morey-Reuner took point for Timberland and had just committed funding for an initial effort to plant trees and to drive farming education as the primary objectives of the non-profit when the 2010 earthquake hit.

The team reconnected just after the devastating earthquake to chart the path forward and to everyone’s relief, there was a collective sigh of relief when the group agreed that nothing would change…but that it was even more imperative that they deliver against the goals set previously.

The Heart of the Smallholder Farmers Alliance

The foundation for the work done by SFA is agriculture. It starts with educating local farmers about best practices with regards to crop rotation, watering, nutrition and seeds which naturally involves a lot of time in a plant nursery. The nurseries comprise the backbone of the SFA and all farmers who are members of the Alliance are required to give back by serving in the local SFA nursery.

To kick off each nursery, SFA took ahold of the local concept of a “Kombit” or work party where the community would pull together to kickstart their SFA nursery. “’Kombit’ is a Haitian Creole word for ‘a community working together toward a common goal,’” said Timote Georges, co-founder of the Smallholder Farmers Alliance. Clearing weeds, planting seedlings, setting up barriers…it was a team effort and really laid the foundation of ownership in the members of the community.

“With Timberland’s impetus we found a way to provide small-scale farmers in Haiti with the three things they needed most: tools, better quality seed and specialized training to improve their agricultural practices,” said Hugh Locke, cofounder of the Smallholder Farmers Alliance.

The SFA continued to iterate and found that not all of the nutrients, seeds and tools needed by the farmers were accessible to the farmers. The natural next step was to spin up an attached store run by and for the farmers. These stores stock all the things needed by farmers, making the SFA a one stop shop for the farmers and have become a critical link in the communities they serve even going so far as to integrate a literacy program.

As farmers gained the education, plants and equipment needed to run a farm on their own land – or land they could rent, farming became a practical solution not only to the daily nutritional needs of farmers but also as a means for generating income by selling excess produce at local markets. The closed loop cycle required farmers to give a portion of their seeds back to the SFA bank which ensured a healthy, sustainable model that would stand the test of time.

Looking Beyond the Community

SFA and Timberland felt that if the current farming model was so successful in a single community, that it had the potential to expand across the nation – and beyond. They started looking for crops that could be grown at scale, for export and settled on two – Lime Oil and Moringa, both of which can be grown extremely well in Haiti.

The local team in Haiti began validating both of these crops in more detail while the extended team reached out to leverage an existing partnership with the Clinton Foundation to find partners who saw the value in the work the SFA was doing in Haiti and was motivated to turn that into action in the form of business relationships.

The overseas effort bore fruit with American grocery chain Whole Foods jumping into the moringa opportunity with several options on the table. Ultimately, Whole Foods identified that moringa was a good fit in an energy drink called Kuli Kuli. After tireless effort, Kuli Kuli energy shots made with moringa from the SFA were on shelves in Whole Foods stores starting January 2016.

Hugh kicked off the local effort in Haiti to establish moringa growing and processing operations and found that much of what he needed simply did not exist in Haiti. Systems we take for granted like organic certification, traceable supply chains and quality control were all massive challenges and required establishment from the ground up.

To reach his vision for the SFA, Hugh and team reached out to the local government for support locally as well as for a scalable operation that could be reapplied to other areas of Haiti and beyond. Aceus Manus, the Regional Director for the Ministry of Environment came out to a new SFA orchard and symbolically planted a lime tree to show the rest of Haiti the importance of planting trees.

As of the most recent update, the Smallholder Farmers Alliance includes:

Based on the encouraging progression documented in Kombit, it is clear that the partnership between SFA and Timberland has had a massive positive impact in Haiti and all signs point to an international expansion in the future. Both organizations were seeking to catalyze a lasting positive impact for the people of Haiti that would stretch beyond just an initial investment and by all metrics, that has been accomplished.

For more information about the amazing work happening in Haiti, check out website for the film here or take a gander at the preview below.