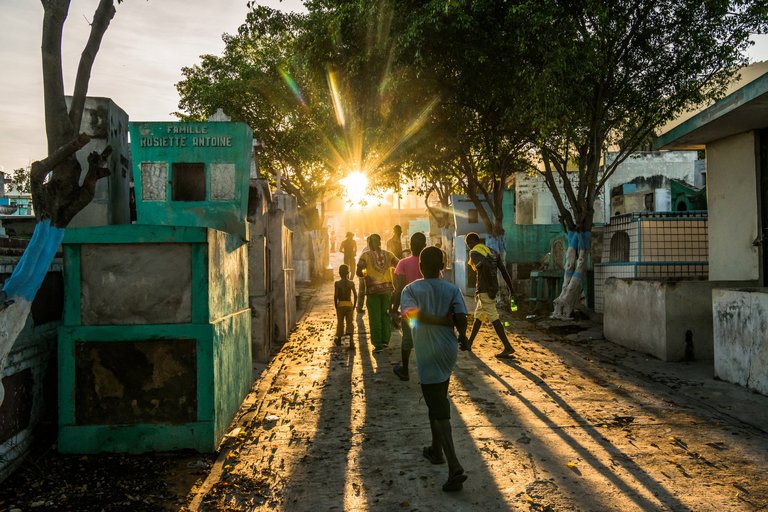 Voodoo devotees take part in Day of the Dead ceremonies in Port-au-Prince, Haiti, on Nov. 1. Credit Daniel Berehulak for The New York Times

The Reader Center is one way we in the newsroom are trying to connect with you, by highlighting your perspectives and experiences and offering insight into how we work.

The End, the New York Times series that looks at how we die and what it tells us about how we live, has resonated deeply with readers. Its latest installment — written by Catherine Porter, The Times’s Canada bureau chief, with photos and video by Daniel Berehulak — paints a vivid portrait of the men who bury the abandoned dead in Haiti.

Readers were moved by the “great article and visual into a world of misery few of us really see.”

For the past decade, Rick Frechette, an American Catholic priest and doctor whom the story follows, and his team have collected and buried the dead left “in gruesome, wet piles that resemble medieval paintings of purgatory” by relatives and friends who cannot afford funeral services. The description of his work prompted an outpouring of support from readers. Here are some of their comments, which have been edited for length and clarity.

When an organization and its founders stretch themselves to do the awful work of retrieving decomposing bodies to perform the final dignity of burial, I have to believe that if there is a God, he must be with them. — Marnie, in Philadelphia

My wife and I have been working there since 1997. We know Father Rick and the wonderful, meaningful work he does. — Greg in St. Paul, Minn.

I was in Father Rick’s medical school class and have been down to Haiti several times both pre- and post-earthquake. I have participated in the burials. I can tell you with certainty that money given to his organization goes directly (and usually immediately) to people in need. — Patricia Tweedie, in Fall River, Mass.

Catherine’s idea for the story was several years in the making. She first visited Haiti as a columnist for The Toronto Star after the earthquake in 2010 that devastated the country. That trip became the first of many.

Three months later, I returned to find that hope had shouldered out despair. People really believed the country would change because of this tragedy. Aid was pouring in, international leaders were vowing to help Haiti “build back better,” and Haitians had started to rebuild themselves.

Since then, I’ve returned to Haiti 19 more times and watched that hope be washed away by frustration and finally, defeat and cynicism.

The rubble was carted off, but not the problems: the lack of public infrastructure, paucity of descent jobs, the blistering poverty, the corruption.

The public morgue seemed to capture all of that. The first time I saw it up close was in 2014. I was writing a story about the stalled reconstruction of the country’s drastically underfunded general hospital. Even before the earthquake, it was known by locals as “the place to go to die.” The morgue was located on its broken grounds and had a similar reputation for dysfunction. It had finally broken down so many times, the hospital’s executive director had shuttered it and brought in two shipping containers as an interim measure.

I watched in horror as a morgue worker opened one container to reveal a jumbled pile of dead bodies rising from the floor. He climbed up, dragging the latest victim to the very top, and left him there. I couldn’t figure out why that image haunted me more than some of the other horrifying things I’d seen there, but it did.

When our international editor, Michael Slackman, who knew about my history covering Haiti, asked me if there was a story from the country I’d want to write for The End, I immediately thought of that shipping container.

With some research, I learned there was a group of men who had not only been as horrified as I, but had taken it upon themselves to offer those bodies some dignity and bury them. The act seemed so hopeful.

Later, Father Frechette explained why his team continued to do this, week after week, even as their funding drained. His explanation got to the heart of why I’d been so haunted by the sight of that morgue worker climbing up the bodies.

“If we treat the dead like garbage,” he said, “then the living are just walking garbage.”