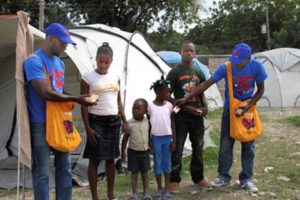 This week Yéle Haiti begun to redeploy some of our 2,000 Yéle Corps workers from cleaning streets and canals to delivering bars of soap tent to tent in the post-earthquake camps in and around Port-au-Prince. This is part of our cholera prevention program that targets tent camps with free soap and hand sanitizer, clean water deliveries, prevention training and an extensive awareness campaign led by hip hop artists.

Yéle has a level of trust among the poor of Haiti that is unmatched by almost any other organization in the country. On December 8th most of the country had shut down following the election result announcement the previous day, with barricades blocking roads throughout Port-au-Prince and angry mobs roaming the streets. That same evening Yéle held a free concert for some 15,000 people in the slum of Cité Soleil to launch our cholera response program and the evening went off without incident. When asked why Yéle could hold an event in the toughest neighborhood in the city and not have any disruption, a local resident said simply, “because it’s Yéle.”

The cholera epidemic is set to grow into a tidal wave of entirely preventable suffering and loss of life. Yéle is joining the wide range of medical professionals, NGOs, government ministries and international institutions that have rallied to help contain the disease, but this combined effort falls far short of the massive undertaking necessary to prevent another major calamity in this beleaguered Caribbean nation.

Check out our new website at www.yele.org. Your support is greatly appreciated.