GONAIVES, January 18, 2011: Yéle’s contribution to stemming the spread of cholera has saved many lives, but you don’t often get a chance to put a face to those who have been helped. Until now. The face in question is that of Florvil Sony, a 15-year-old boy who lives with his parents and two brothers in the small farming community of Morancy, about 45 minutes from the outskirts of Gonaives. He recently contracted cholera. As his symptoms quickly became critical, his parents were frightened that the rest of the family could be infected if they tried to care for him. Not knowing what to do or who to turn to for help, they abandoned Florvil to die.

Twenty of the Yéle Vert technicians and farmers in this same area were trained last November in cholera prevention and treatment by Partners in Health. As word spread of Florvil having contracted the disease and been abandoned to die, a Yéle Vert technician named Wilson Noel took action. He found Florvil, took him to one of the Yéle Vert nurseries and gave him the life saving combination of water, salt and sugar that he had learned about from Partners in Health. Having stabilized Florvil, Noel then took him using the nursery’s motorcycle to a hospital in Gonaives.

By last week Florvil had completely recovered and was back with his family and attending school as usual. 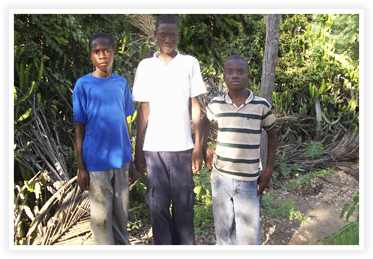