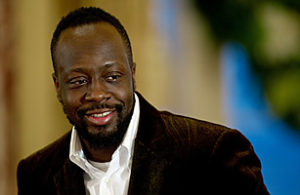 There is a lot of smoke and mirrors as Wyclef gains loads of column inches  promoting his possible run for the Presidency of Haiti.

I happen to like Wyclef A LOT!! Personally, but is is a disservice to the people of Haiti to suggest that he – and  a very unprofessional and weakly qualified bunch of camp-followers – are the best choice to lead Haiti. The nation is in a very fragile state and cannot suffer the consequences of some entertainment personality, and a team of unqualified people, to destabilize the country further.

No one will argue that Wyclef would not be better than Preval.

Even a pile of dog poo is better than Preval.

But Haiti needs something better than that to pull things together.

Wyclef is a cool guy, but his handling of his charity  in the States –

Not filing tax returns for 8 years,

Passing donors’ money to Haiti, without going through the charity’s books,

Putting his girlfriend on the staff at a fortune per month,

Scandal in Miami over an expensive house foreclosure,

Current questions, amongst the Haitian Mob about earthquake donations,

Leave him in a delicate situation and also indicate the potential disarray of his Presidency, should he succeed.

The Time article  is very impressive, but I will take one small quote, that can be used to show a candidacy is doomed to  failure, at the point where he presents his documentation, unless Haiti – yet again – flaunts its  own laws.

Remember the 2006 fiasco when a guy named Simeus  bounced onto the stage, claiming to own a huge  food business…when, in fact, he was not the owner at all. The company was owned by a group of Jewish investors in Beverly Hills, California. They used his name in order to gain tax benefits. You see, in America you get benefits if you have a minority member on the board…a Black guy, a woman, a gay,  a Spanish American…

Simeus was also under threat of bankruptcy in Texas, even as he promoted himself as some sort of millionaire, wanting to help his people.

He was just another bum wanting to rape our Treasury, and soon disappeared from the scene when he was thwarted. No one has heard anything about this reject since 2006. He has made no move to help his people. He was just another lie.

The country deserves the best.

To be qualified to run for the presidency, Jean must prove that he has resided in Haiti for five consecutive years, owns property in the country and has never been a citizen of any country other than Haiti. Jean-Jacques says those rules are open to interpretation, pointing out that no time frame for the residency is specified, thus Jean — who was born in Haiti, left at age 9 and was raised in New York City — can run for President. “If we get too caught up in these details, it will be a great sorrow for this country,” Jean-Jacques says.

Jean-Jacques is blowing smoke.  He suggests no time frame is specified in the Haitian Constitution, with regard to residency qualifications for a presidential candidacy.   The Constitution is very specific. It states:

Have resided in the country for five (5) consecutive years before the date of the elections;

I am not much at math, but this would make me think that Wyclef would have to resided here  during the period 2005 – 2010.  He has spent a few days here, which does not constitute residence.

He stays at the Kinam Hotel – as he did a few days ago, which does not count as his residence.

His American tax forms will state what his residence is.

If he was actually residing in Haiti for 5 years, he would have lost his Green Card Status.  To maintain a Green Card you must reside in the States.

Anyone interested in reading the Haitian Constitution, in English or French, can go to this link;

For those who just want the basic fact about residence, I present the specific  section…

EXCERPT FROM THE HAITIAN CONSTITUTION OF 1987

e. Have resided in the country for five (5) consecutive years before the date of the elections;

Let’s not waste time on someone carrying all this baggage.

And this Jean-Jacques, who has jumped on Wyclef’s bandwagon has some baggage of his own. He was a Preval-controlled member of Haiti’s Chamber of Deputies and has been mentioned as an operator in the cocaine traffic into America.

Perhaps Wyclef is merely a stalking pony for Preval.

He could be Preval’s  hope for Preval to retain power.

4 thoughts on “Will Wyclef Jean run for President of Haiti? Many QUOTES and FACTS”