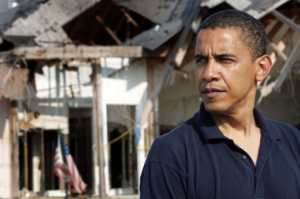 The gods of politics have an ironic sense of justice. They can force a president to confront more complex versions of the very problems we thought we had solved by electing him. As you judge, so shall you be judged: sometimes there is an almost mathematical precision to it. Just ask President Barack Obama.

Elected to end the war in Iraq, he finds himself deep in a metastasizing war against Al Qaeda and its allies in Afghanistan and, perhaps, elsewhere. Elected to bring America out of a recession, he now has to deal with our dwindling role in a global economy dominated by the BRICs and by the rapidly growing, smaller “frontier” countries.

Elected in part out of revulsion at the Bush administration’s response to Hurricane Katrina, Obama now finds himself confronting an even more devastating and complex humanitarian crisis.

And, adding irony upon irony, the racial context of New Orleans is writ large in Port-au-Prince. Katrina cost George W. Bush what little standing he had among moderates in his own party in part because the shocking images of suffering in New Orleans were so racially imbalanced.

Now the Obama administration’s competence and compassion will be tested in a similar racial context—and with a much worse infrastructure. Obama and his aides understand all of this. The president was out early today with a strong statement about American efforts to deal with the aftermath of the devastating Haitian earthquake.

Expect to see a parade of official statements and rescue missions. Expect to see the Pentagon deeply involved—ships and soldiers—to supplement international relief efforts. Expect to see the president and chief of staff Rahm Emanuel keeping a close, minute-by-minute watch on what is happening around the island. Expect to see a review of what the administration has—or hasn’t—done to improve the dire overall life of that country. Expect Obama to make sure that there is no egregiously incompetent “Brownie” in the chain of command, and that, as president, he doesn’t tell anybody they are “doing a heck of a job” unless they really are.