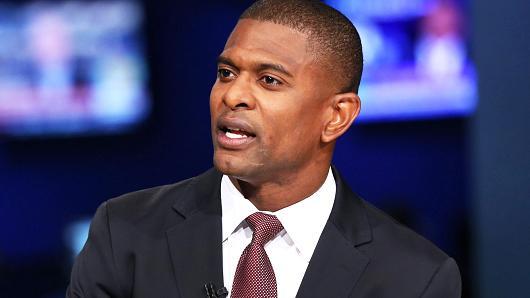 Let me begin by saying this, I am a 37-year old African-American man raised in Texas. As a kid, I had to actually battle racist groups like the skin heads, while actual hate crimes that I took on as a 14-year old caused the KKK to organize a rally in my town in 1994.

I was blessed to go on to earn a college scholarship as a two-sport athlete, I played professional football, worked on Wall Street and completed two Masters’ programs. I am currently a UN ambassador for peace and sport and I have dedicated my life to serving and bringing resources to some of the most underserved black populations on the planet. I’ve also worked aggressively to try to improve race relations between law enforcement and black youth in the US through my #Stand2Protect Campaign.

Oh yeah, I donated the computers and furniture to Barack Obama‘s first campaign office in Minnesota in 2007 and I most recently gave Hillary Clinton a maximum donation early this election season as I was excited to see the first female president of the United States.

In 2012, African-American voter participation exceeded that of white voters for the first time in our nation’s history. The black vote made such an impact that, in 2012, it accounted for Obama’s entire margin of victory in seven states, which included Florida, Maryland, Michigan, Nevada, Ohio, Pennsylvania and Virginia (Cook Political Report 2015).

Black-voter participation has increased over the past three elections cycles since 2000 – that is, until Hillary Clinton led the ticket.

Clinton swayed popular black elites and icons such as President Barack and Michelle Obama, Jay Z, Beyoncé and even Ohio’s own Lebron James to fan the country in key states – but to no avail.

So, what kept me and countless other black voters from rallying behind the Hillary train once voting day came on Nov. 8?

As CNN contributor Van Jones and others so eloquently displayed in the Netflix documentary The 13th, Former President Bill Clinton’s crime bill resulted in more blacks being sent to prison for non-violent crimes than during any other president’s administration in our nation’s history. Not only did he enforce and promote mass incarceration at that time, he went on to stand behind these policies for almost 20 years. If there is one thing that has stripped underserved black communities of opportunity, it is the unwarranted incarnation of non-violent black men and women that has left hundreds of thousands of families without their fathers or mothers.

While these are policies from the BILL Clinton administration, people always associate these policies with “The Clintons.” It’s something she could never shake.

She campaigned on Obama’s economic agenda 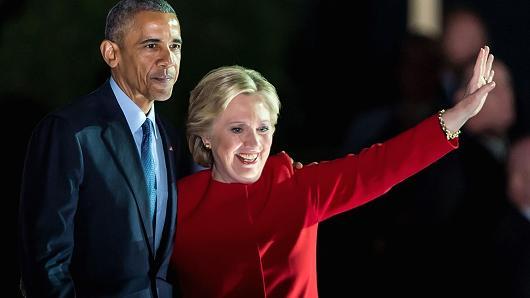 President Barack Obama and Democratic presidential nominee former Secretary of State Hillary Rodham Clinton on stage during the Hillary Clinton ‘Get Out The Vote’ campaign rally on November 7, 2016 in Philadelphia, Pennsylvania.

Then, there’s the Obama factor.

In this election, Clinton constantly campaigned on the successes of the Obama economic agenda.

Now, I’ve praised President Obama on his amazing management of the great recession as well as his consistent job growth and overall economic progress. However, that success, unfortunately, includes every race except for blacks. The unemployment rate for blacks is nearly 9 percent and remains twice that of whites .

One would hope that the healthy 16-24 year olds who make up our nation’s most underserved race would be a vibrant work force. Well, the fact is that nearly 60 percent don’t work at all.

The unfortunate reality is that, for a growing number of underserved blacks in this country have lost the American dream under Obama. Backing Obama’s economic policies did Hillary Clinton no favors with millennials and working class blacks when it came to jobs and the economy. Blacks also had to take into account that Hillary and Bill themselves amassed $100 million to$200 million in personal wealth.

Throw in Obamacare premiums rising at staggering rates and this had to push a number of black voters away from supporting the Clinton ticket, as they dealt with the realities of financial struggles.

She missed an opportunity to show the black community support

During the campaign, Hilary Clinton attacked Donald Trump for highlighting troubles in our urban areas, even if his wording lacked class.

The statistics are staggering: Twenty-five percent of black parents in America report that their children live in unsafe neighborhoods, according to the US News and World Report on education published last year. Thirty-four percent of high-school freshmen who are held back in our school system are African-American, nearly three times the rate of whites. Blacks also make up 42 percent of students who receive multiple out-of-school suspensions nationwide. Statistics show that 40 percent of white students finish their college degree in four years, compared to only 20 percent of black students.

Why wouldn’t she just agree with Trump that there are problems that need to be addressed? That would have conveyed to the black community: I hear you. I’m here to help.

And, in this new age of transparency and the internet, where every word you say gets recorded and re-tweeted, it’s more important than ever for political candidates to say things that are directly aimed at and support key constituencies.

Of course, the internet recorded Donald Trump’s history of racial discrimination and his divisive tone toward women. But, what transcended that was Trump’s anti-establishment stance. That has finally taken the wool from over the eyes of many African-Americans — including myself — in relation to the Clinton family, media and the establishment.

It’s been hard to face the facts on how our underserved black lives have gotten worse, not better under our beloved President Obama. The undeniable truth about the Clintons has been disappointing to many because they’ve prided themselves on improving the lives of African-Americans for decades, even as their incarceration policies crippled our communities at its core.

Blacks have supported the Clintons, campaigned for them, donated to them and considered them one of our own. (Remember when people called Bill Clinton the “first black president?”)

African-American comedian Dave Chapel recently voted for Hillary Clinton but made it clear that he didn’t feel good about it as he stated “She’s not right and we all know it.”

When I finally got into the ballot booth and checked away at local, state and national Democrats on my ballot, I chose a different route for president. I voted for the hundreds of thousands and black non-violent criminals incarcerated as a result of the mandatory minimums. I voted for a more transparent system of deploying aid to underserved countries. I voted for the dream of seeing black millennial and general unemployment rates reach the levels of other races in America. I voted for the hope that entitlements will put accountability measures in place in order to keep low income black parents involved in their kids education as well as help spur job creation over well fare in some cases. I voted for a hope of making black America great again too. I voted for an end of 30 years of establishment rule in America.

I voted for President Donald Trump, with hopes that God frees his mind of the bias and division long enough to do great things for blacks and all the citizens of our great nation.

Commentary by Jack Brewer, a former NFL safety who played for the Vikings, Giants, Eagles and Cardinals. He is also the founder and CEO of the Brewer Group. He has a master’s degree in sports management from the University of Minnesota. He serves as an ambassador for peace and sport for the United States Federation of Middle East Peace at the United Nations. Follow him on Twitter@JackBrewerBSI

Jack Brewer is an honoured presence in Haiti, as he brings  a little happiness into the lives of our children. The Brewer Foundation has worked with several communities here, to make life a little better.

We salute Jack on his special OPED piece that really says things as they are.

We have witnessed, firsthand, the Clinton hypocrisy that saw them coordinate the rape of Haiti as $12,000,000,000  went somewhere else. It sure didn’t get spent in Haiti. The only projects I know of were an investment, in the luxury OASIS Hotel, and a claim to have created 3 schools, in Leogane – for $6,000,000 which were – in reality – 3 FEMA trailers from Katrina (probably donated at zero cost) that were banned for human use, in the States, because of toxic chemicals.

The Haitian kids couldn’t stay in them – so there classes were held outside. 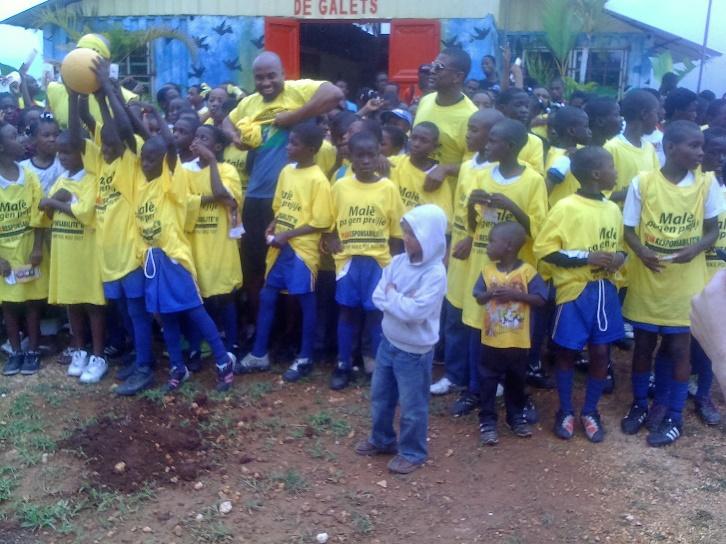 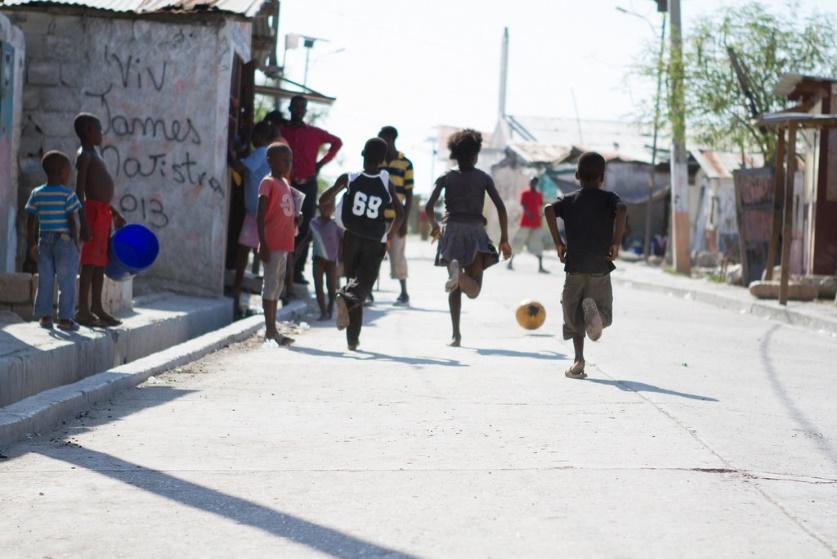 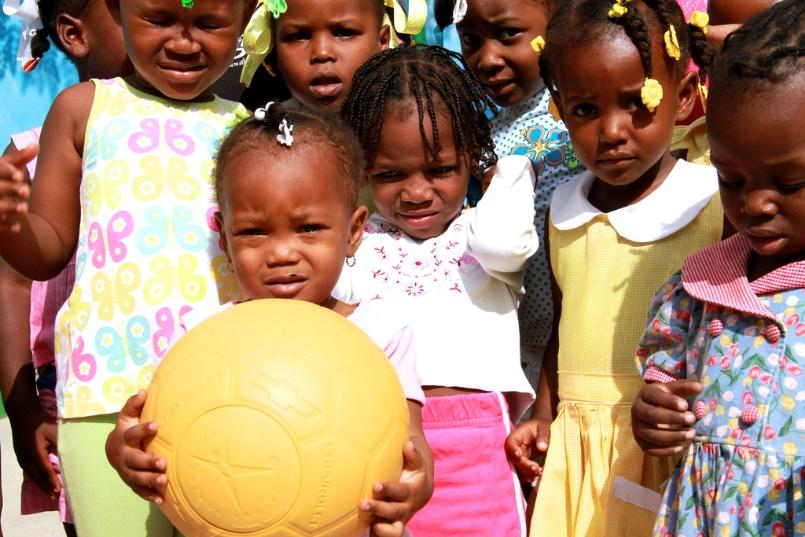