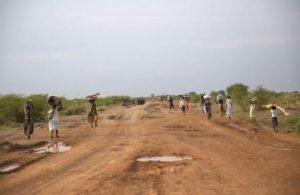 Civilians flee from renewed attacks in Bentiu, Unity state of South Sudan April 20, 2014. Rebels slaughtered hundreds of civilians when they seized the South Sudan oil hub of Bentiu, hunting down men, women and children who had sought refuge in a hospital, mosque and Catholic church, the United Nations said on Monday. REUTERS/Emre Rende